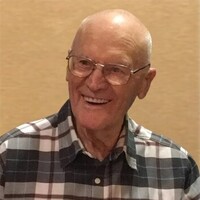 Funeral service for LeRoy Gimbel will be held at 1:00 p.m., Monday, June 29, 2020 at Gillette Memorial Chapel with Pastor Dan Knust officiating; interment to follow at Mt. Pisgah Cemetery. Visitation will take place from 4:00 p.m. to 6:00 p.m., Sunday, June 28, 2020 at Gillette Memorial Chapel. We encourage all who are unable to attend to view the service as it will be lived streamed on our website; www.gillettememorialchapel.com.  Leroy Gimbel 90, of Gillette died Tuesday, June 23, 2020 at The Legacy Living and Rehabilitation Center. Leroy was born September 24, 1929 in McClusky, North Dakota to Henry and Karoline (Seibel) Gimbel. He was the 10th of 13 children. From North Dakota, his family moved around until eventually settling on his grandparent's farm in Texas where he lived through the Dust Bowl, the Great Depression and WWII in what is now a ghost town. One of his brothers later moved the family to Brush, Colorado where Leroy met Nancy Weimer, the love of his life. She winked at him and the rest was history. While in high school, Leroy joined the National Guard and served his country during the Korean War as a medic. He worked in the oil field most of his life along with a few other part time jobs. He started his own business, Gimbel Water Service, which they owned for 25 years. After selling their business, Leroy went to work for Pearson Oil until he was 80. He was always willing to help with any project that anyone needed help with. He enjoyed watching baseball, specifically the Colorado Rockies. In his younger days he was an umpire for the baseball teams in Gillette as well as a coach for his son Tim's baseball team. He enjoyed football and his favorite teams were the Dallas Cowboys and Denver Broncos. Leroy enjoyed attending all the kids sporting events whether it be hockey, baseball or soccer. When he was not working, he would tinker in his shop often falling asleep in his recliner he had kept in there. He loved his land at Nicholson’s, which he proudly called "The Farm" where he watched the deer in his yard. On the farm he had his coveralls, a John Deere tractor and mower which he loved to get out and always had the biggest smile as he worked. He did not understand the meaning of retirement and had no idea how to rest and relax. He loved to travel and craved adventure and decided he wanted to skydive at the age of 85. His goal was to do it again when he turned 90 but health reasons kept him from reaching this goal. As much as Leroy loved fishing, his true love in life was his numerous grandchildren. He is survived by his wife of almost 70 years, Nancy Gimbel; daughter, Terry Gimbel; son, Tim (Laura) Gimbel; daughter, Denise (Noland) Peacock; daughter, Tammy (Pat) Patik; two sisters, Ruth Lewis and June Kelp, 9 grandchildren, 21 great-grandchildren and 8 great-great grandchildren. He is preceded in death by his parents, son Mark Gimbel and 10 brothers and sisters. Leroy meant so much to so many people. He was a fun loving, kind and caring man who was a kid at heart and will be missed by all who knew him. In lieu of flowers the family requests that memorials be made in Leroy’s name to benefit Primrose Retirement Community 921 Mountain Meadow Lane, Gillette, WY 82716 or Jason’s Friends Foundation 340 West B Street, Suite 101, Casper, WY 82601. Memorials and condolences may be sent in care of Gillette Memorial Chapel 210 West 5th Street, Gillette, WY 82716. Condolences may also be expressed at www.gillettememorialchapel.com

To order memorial trees or send flowers to the family in memory of Leroy Gimbel, please visit our flower store.