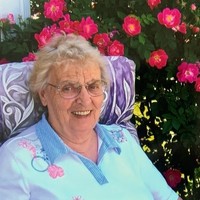 Funeral services will be held at Family Life Church in Gillette, Wyoming on Friday, February 7, 2020 at 10:30 am with a luncheon and fellowship to follow before burial at Mount Pisgah Cemetery. Visitation will be held Thursday, February 6, 2020 from 5 pm – 7 pm at Walker Funeral Home in Gillette, Wyoming. Leola Rebecca (Kottraba) Thar went to be with the Lord, and those who have gone before her, on February 2, 2020. She died peacefully in the presence of family and the loving staff at The Legacy Living & Rehabilitation Center in Gillette, Wyoming. Leola’s story began 96 years ago on her family’s homestead, south of Rozet, Wyoming where she was born to Raymond and Kathryn Kottraba on September 20, 1923. Leola attended Owens School in her early years and completed her education at Rozet High School. In 1937 she went on her first date with a man who would eventually become her husband, Vincent Thar. They went to see the movie “Andy Hardy Finds Love” in Moorcroft. She was a freshman and he a junior. She never went out with him again until after she graduated in 1941. Vince and Leola loved each other fiercely. Once WWII broke out, Vince enlisted in the Army Air Corp and they eloped to Broadus, Montana to be married on September 16, 1942; 10 days before Vince shipped out. When Vince boarded the train for war, they had $20 between them. Vince gave $15 to his new wife and kept $5 for himself. And from there, they built a legacy. While Vince was at war, Leola had their first daughter, Rebecca “Becky”, and raised her along with Leola’s younger sisters, Hazel & Helen, in Rozet. Knowing she needed to provide for her young family, she took the position of US Postmistress at the Rozet Post Office. In her words:

“I was married to Vince in 1942, he went to the Air Corp. and I became the Postmistress of Rozet, Wyoming.

I was one of the first Postmistresses in Wyoming, the position which I held for 37 years. We remodeled the building that the post office was in and lived in the back of it. We raised 4 children in this building.”

When Vince came home from the war, they got to work building their life together. They would go on to have three more children; Gary, Sherryl, and Rochelle “Shelly”. Eventually, they were able to move their family to the ranch on Timber Creek Road where they raised Black Angus cattle and watched their family grow. After Leola retired from her position at the Post Office in 1980, she began developing her love of art. She painted beautiful flowers and scenery and did incredible work with leather. She would submit her work to the County Fair and would come home with many “Best in Show” ribbons. She played piano and baked the best apple pie. She had a green thumb for all flowers but grew the most beautiful roses. While Vince was in the war, he wrote a letter to Leola every day, for four years. In each letter he tells her how much he misses her, how proud he is that she’s his wife, how he can’t wait to see her and hold her in his arms. Now, after 10 years of being apart, they have been reunited and are waltzing across Heaven. We will miss her and her advice about pie crust, why our roses won’t bloom, and how to raise our babies. But her legacy lives on in those she loved. Leola is survived by her children: Becky and Robert Trigg, Gary and Susan Thar, Sherryl and Greg Lindblom, Shelly and Kent Clark; her 11 grandchildren; 17 great-grandchildren; 3 great-great grandchildren; and numerous nieces and nephews. Leola is proceeded in death by her husband, Vincent Thar; her parents, Raymond and Kathryn Kottraba; her siblings, Willa Irwin, Charles “Chuck” Kottraba, Hazel Reisland, Helen Whisler, and Leland Kottraba; and granddaughter Gina Thar. A memorial will be sent in her name to the Shriners Hospital for Children in Salt Lake City, Utah. Memorials and condolences may be sent to Walker Funeral Home, 410 Medical Arts Court, Gillette, WY 82716. Condolences may also be sent via the website at www.walkerfuneralgillette.com

To order memorial trees or send flowers to the family in memory of Leola Rebecca Thar, please visit our flower store.