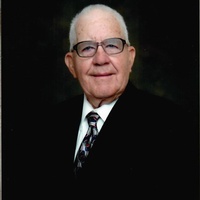 Leo played baseball and basketball in school and he graduated High School in New Underwood, SD. After high school, he worked at different jobs in and around Rapid City, SD. He was a mechanic and heavy equipment operator. He also worked construction.

Leo met Margaret Della Birnbaum in 1942 and they were married on July 3, 1945. In 1951 he went to work for Johnson Machine in Rapid City and then for West River Equipment, the Caterpillar dealer in Rapid City where he worked for almost 20 years.

In his younger years, Leo played the saxophone. He was active in Boy Scouts and enjoyed bowling, hunting, dancing and throwing horse shoes. Leo and his family and friends spent many summer days in the Black Hills at Sheridan Lake fishing and skiing. They later carried on that family tradition with their grandkids after moving to Wyoming and becoming members of the Keyhole Boat Club.

In 1969 he moved to Gillette, WY and managed the Mid-Town Trailer Court. Leo was part owner and operator of Gillette Diesel Service and worked there for over 10 years. He sold Gillette Diesel in 1979 and did heavy equipment mechanic repair jobs on his own. He also worked for Northern Drilling and Banks Enterprises. In 1984 he went to work for Ruby Drilling as a mechanic.

In 1993 his wife Margaret of 48 years passed away. Prior to his passing he spent time with his sons in Texas and California. Leo looked forward to his daily visits with his many friends at the Senior Center. But most of all he enjoyed spending his time in his shop and on his property East of Gillette. He worked on his own equipment and always had a dozen projects going on at the same time.

To order memorial trees or send flowers to the family in memory of Leo Emil Outka, please visit our flower store.