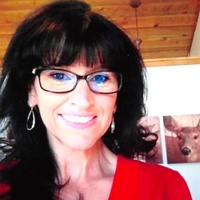 Funeral service for LaVonn Orkney will be held at 10:00 a.m., Tuesday, August 28, 2018 at Gillette Memorial Chapel with Father Cliff Jacobson officiating; interment to follow at Mt. Pisgah Cemetery. Visitation will take place from 4:00 p.m. to 6:00 p.m., Monday, August 27, 2018 at Gillette Memorial Chapel. LaVonn Marie Orkney age 51, went to be with her Lord on Monday, August 20, 2018 after a 3 year battle with colorectal cancer. She went peacefully surrounded by her loved ones. LaVonn was born in Gillette, WY on June 24, 1967 to Bill and Betty Clouse. LaVonn met Delfie Urrutia and had a daughter Ramacita Urrutia in 1988. In 1995 LaVonn met Ken Fosen and had twin daughters, Chantelle and Jacqueline Fosen. LaVonn met Scott Orkney and later got married on September 4, 2005; two months later they were blessed with their first son, Chandler Orkney. In 2010 they had another son, Garrett Orkney. LaVonn loved the outdoors, she loved fishing, camping and more than anything she loved spending time with her only granddaughter, Paisley. When it came to her family, there was nothing she wouldn’t do for them. She always had the biggest smile on her face despite all the hardships she had overcome. LaVonn was the most amazing wife, mother, grandmother, and friend to all who were fortunate to have known her. LaVonn is survived by her father, Jesse William Clouse; mother, Betty Jean Clouse; siblings, William Duane Leonard; Eddie Dean Leonard; and Buffy Jean Leonard; husband, Scott Charles Orkney; daughters, Ramacita Rose Urrutia; Chantelle Lynn Fosen; and Jacqueline Elena Fosen; sons, Chandler James Orkney and Garrett Scott Orkney; granddaughter, Paisley; and numerous nieces, nephews, aunts, uncles, and cousins. Memorials and condolence may be sent in LaVonn’s name in care of Gillette Memorial Chapel 210 West 5th Street, Gillette, WY 82716. Condolences may also be expressed at www.gillettememorialchapel.com

To order memorial trees or send flowers to the family in memory of LaVonn Marie Orkney, please visit our flower store.