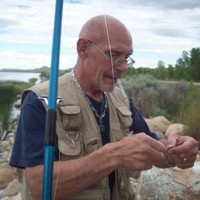 Kreig Braken Balls was born April 1, 1949 to Delwin and Donnie (Bracken) Balls. He passed away unexpectedly at his home Sunday, March 29, 2020. He grew up in Arvada, Colorado where he was active in Cub Scout and Boy Scouts Troop 231. Where he would go on to achieve his Duty to God Award and served in many leadership areas as a Scout. In his younger years he enjoyed Drafting, Band and even won 1st Place in the Science Fair. He graduated Arvada High School in 1967. After school he went on to register for the Navy. He would proudly serve his country during the Vietnam War for 4 years on the USS George K. Mackenzie. After his discharge from the Navy, Kreig would go on to have 2 children, Jeffrey and Stacey. He worked for Record Supply for many years, Fairmont Supply before starting his won business Xtreme Hobbies for several years, before starting his true happiness for over a decade at Camel Lanes, where he was still employed at the time of his passing. Later in life he would go on to find the love of his life, Carla where 3 more children joined, Dewayne, Katherine and Heather. Kreig and Carla retired in 2015 to Florida their dream location. In 2017 they moved back to Gillette so “Papa” could be closer to the Big Horn Mountains that he loved to be in. Kreig was known for his avid love of fishing, camping, RC cars, bowling and his passion for cooking but he had a love for his family that was undeniable. His mother Donnie was a highlight to him. In February 2020 he and Carla got to visit his mother, Donnie; sister, Celeste and brother, Scott. Kreig also had information and knowledge on things that you really would have never thought of. Above his kids was his 100% devotion and love of his grandchildren and anyone that talked to him, he made sure they knew that, he always had a picture and a story to share. His bowling family and community were also a huge part of his life and his family is grateful for that. Although Kreig is no longer with us his smile, laughter, love and amazing cooking skills will be sorely missed but not forgotten. Kreig is survived by long-time fiancé, Carla; mother, Donnie; sister, Celeste (Phil); brother, Scott (Margaret); children, Jeff (Tammy); Stacey; Dewayne (Teresa); Erica (Chris); Katherine (Ty); and Heather; grandchildren, Audra, Jason, Lily, Madi, Mason, Parker, Rustyn, Tyler, Zachary and Zoey. He is preceded in death by his father, Delvin Balls and brother, Roger. Currently the family is not doing a service. At a later date there will be a celebration of life, so everyone can attend. In lieu of flowers the family asks everyone to cherish their time with loved ones a little more. Memorials and condolences may be sent in care of Gillette Memorial Chapel 210 West 5th Street, Gillette, WY 82716. Condolences may also be expressed at www.gillettememorialchapel.com

To order memorial trees or send flowers to the family in memory of Kreig Bracken Balls, please visit our flower store.