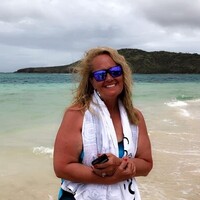 With open arms from her mom and sister, Kimberly Dawn DeCoteau, age 56, was welcomed home unexpectedly on October 4, 2021. Kim was born on January 28th, 1965 in Valentine, NE the daughter of Frank Sr. and Betty (Sokol) Keller. They moved to Gillette in 1978. She attended Campbell County High School. On September 17, 1988, Kim married her soulmate and auction partner, Robert “Bob” DeCoteau. They were blessed with three children: Justin, Betsy, and Alexandra.

She lived in Gillette until the death of her mother in 2002 when she decided the peaceful pines and lake was where she needed to be. Kim resided in Pine Haven until the time of her death. In the more recent years, after leaving the railroad, Kim decided to let her adventurous spirit break free and declared life was too short not to go out and explore. More often than not, she was accompanied by her husband, best friend and sister-in-law, Rose Picchi, and brother-in-law, Brad Picchi, on these adventures that would take them to Chicago, New York, Sturgis, and many other places. Other times, you would find Kim in Puerto Rico, where she found serenity and peace, on a motorcycle going through the hills enjoying the fresh air, or on a camping trip with family. Family was important to Kim and she was just as important, if not more so, to her family. She was considered the matriarch; the secret keeper, protector, warrior, caregiver, nurturer, best friend, stand-in mother. The one who kept everything and everyone together; a person who would do anything for anyone, including giving them a reality check or two when they needed it the most. However, with all of the hats she wore, she was most excited and proud to wear the hat of grandma. Whether it was watching a dance recital, football game, going on lunch dates that would include pedis and manis, attending Grandparent’s day, or staying home teaching the next generation how to bake, she made sure to be the best grandma she could be. She was just that.

The void is deep in the hearts of her surviving loved ones: husband, Bob DeCoteau; her children: Justin (Chelsea) DeCoteau, Betsy (Wally) Symonds, Alexandra (Branden) Baker, and bonus child, Jeremy Wagner; her grandchildren: Kylee, Brayden, Ayden, Zayden, Lyrica, Paisleah, Abigail, and Saber; her father, Frank Keller, Sr.; brother, Frank Keller, Jr.; sister-in-law, Rose Picchi; brother-in-law, Brad Picchi; her nieces and nephews, including her second “children” Kristain (Mike) Schutt and Kalyn (Kayla) Fruits; and great-nieces and nephews, including Emily and Mathew Schutt, Kagen Kurtz, and Kwinn Fruits. She was preceded in death by: her mother, Betty Keller; sister, Julie Johnson; grandbabies, Arrow and Izabella DeCoteau; and great-nephew, Khrome Keller. We love you to the moon and back, always and forever, Kim.

To order memorial trees or send flowers to the family in memory of Kimberly Dawn DeCoteau, please visit our flower store.