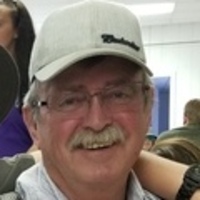 Funeral Services for Kenneth Kercher will be held Tuesday, August 31, 2021 at 10:00 a.m. at Gillette Memorial Chapel, Gillette Wyoming with Erik Bergquist officiating. Interment will follow at Mount Pisgah Cemetery. Visitation will take place Monday, August 30, 2021 from 4.-7 p.m. at Gillette Memorial Chapel. Kenneth Lee Kercher, 74 was called home on Monday, August 23, 2021. Kenneth was born on January 16, 1947 to Violet Anna Kercher in Presho S.D. He grew up with extended family raising him in Reliance, Oacoma and Chamberlain S.D. area. He proudly served in the United State Navy during the Vietnam War. Kenny returned home after time in the service and worked at Hutmacher Drilling. He then met and married the love of his life, Linda (Krois) Kercher on July 2, 1971 in Chamberlain S.D. He then took a job with Venekamp Drilling in Rapid City S.D. In 1974 he took a job working for Dowell Drilling in Gillette W.Y. In 1979 he decided to leave the oil fields and started a career at Amax Coal Mine until his retirement. During this time, Kenny and Linda raised their two sons Rodney and Scott. Family was the most important thing to him. Even though his job would keep him away at times, he always found time for his family. He enjoyed many family adventures of camping, fishing, hunting, bowling and watching his boy’s activities. He was also later blessed to have two daughter in-laws that he treated as his own, Jenny and Tara. Rodney and Jenny blessed him with grandsons Austin, Spencer, and granddaughter Alyissa. Scott and Tara also gave him blessings of a bonus grandson Ryan Overfield and granddaughter Destani and great-grandkids Amelia and Stetson Overfield. Again, you seen that sparkle in his eyes every time he was able to spend time with them or go to their activities. He took extra joy in watching them bowl as he enjoyed giving them pointers, as he was a bowler himself. Kenny’s huge heart, infectious laugh, sense of humor and his one-of-a-kind character will be missed by many. Kenneth is survived by his wife of 50 years, Linda Kercher, his children; Rodney (Jenny)Kercher, Scott (Tara) Kercher. grandchildren; Austin, Spencer, Alyissa, Destani Kercher and Ryan (Kiara) Overfield. great-grandchildren; Amelia, Stetson Overfield. Half-sister; Rose Byrum, half-brother Mike Coats. Sister-in-law; Diane Hieb and brother-in-laws Dave Hieb, Gary Swanson. Many cousins that were like siblings to him, nieces, nephews and close friends. Kenneth is preceded in death by his mother; Violet (Kercher) Kercher, grandparents; Gutlup and Sophie Kercher, half-brother; Jerry Coats, Aunts; Darlene Polvin, Ruby McCormick, Patty Ann Kercher, Uncle; Dwayne Kercher, Cousin; Joseph Kercher, mother and father in-law; Geneva and Joseph Krois, sister in-law Susan Swanson and Debbie Krois, nephew; Russell Swanson and great nephew Russell Swanson. Memorials and condolences may be sent in care of Gillette Memoria Chapel 210 West 5th Street, Gillette, WY 82716. Condolences may also be expressed at www.gillettememorialchapel.com
To order memorial trees or send flowers to the family in memory of Kenneth Lee Kercher, please visit our flower store.