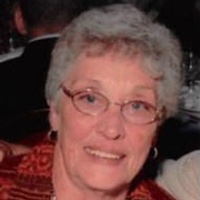 Funeral service for Kay Matheny will be held at 10:00 a.m., Friday, June 8, 2018 at High Plains Community Church with Pastor Dan Morgan officiating; interment to follow at Mt. Pisgah Cemetery. Visitation will take place from 5:00 p.m. to 7:00 p.m., Thursday, June 7, 2018 at Gillette Memorial Chapel. Kay Matheny, 76, of Gillette, WY, passed away peacefully surrounded by family at Campbell County Memorial Hospital on June 5, 2018.  She was born December 13, 1941 in Worland, WY.  Kay was the second child born to Arthur and Eva Cottrell, sister to Lyle Cottrell.  She grew up in Buffalo, WY where she attended most of her schooling.   Her family moved to Cody, WY where she graduated high school in 1959.  She worked various jobs, such as a teller at 1st National Bank in Casper. That is where she met her future husband, William “Jack” Matheny. They married on March 17, 1962 in Rapid City, South Dakota.  They were married for 56 blissful years.  They had four children, Scott, Terri, Wesann and Sonja.  She was a devoted wife and loved her children very much.  She began raising her family on a ranch near Recluse, WY where she worked as a janitor at the Recluse School.  In 1975 the family moved into Gillette.  She continued raising her children while working at the family business; Cut-A-Cross Yamaha Shop, and Beverage Broker.  Later she went to work at Walmart in the fabric section because of her love for sewing and knitting.  She also help form and became the CEO of Black Diamond Investigation and Securities.  She attended High Plains Community Church regularly where she was involved in Bible Studies, Ushering, and Vacation Bible School.  You could see her there every Sunday in the first row of the first service.  She enjoyed traveling with the Frist National Bank Horizon Club around the world.  She and Jack were encouraged by everyone to attend all the trips because of their great spirits and positive attitude.  They rarely missed a trip and often took more than one a year.  Kay was known for taking pride in mowing and keeping up with her large lawn weekly.  Hosting all the family gatherings was something she took great pride in.  Every holiday was spent at her house.  Her family will especially miss her homemade popcorn balls, peanut brittle and chex mix that was given out regularly.  She adored her nine grandkids and never missed any of their sporting events or activities whether in high school or college.  She always took the time to mail each and every one of them a card on every holiday no matter where they were living at the time.  She lived a healthy and active 76 years until recently being diagnosed with cancer and quickly succumbed to the disease.  Kay is survived by husband, W. Jack Matheny; son, Scott Matheny (Lori); daughters, Terri (Leo) Hinkel, Wesann Brown, Sonja (Jerry) Geer; grandchildren, Kolby (Kaycee), Kody, Westin, Kylee, Sydney (Beau), Camdin, Kelsey, Jessie, and Abby; mother-in-law, Peggy Buell.  In lieu of flowers the family requests that memorial be made in Kay’s name to the D.A.R.E Program.  Memorials and condolences may be sent in care of Gillette Memorial Chapel 210 West 5th Street Gillette, WY 82716.  Condolences may also be expressed at www.gillettememorialchapel.com

To order memorial trees or send flowers to the family in memory of Kay Matheny, please visit our flower store.