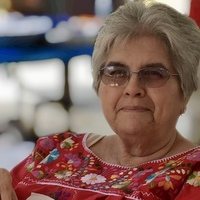 Funeral Mass for Katherine "Katie" Palmer will be celebrated 10:00 a.m., October 8, 2022 at St. Matthews's Catholic Church. A luncheon will follow. Interment will be in Mt. Pisgah Cemetery. Katie passed peacefully on September 22, 2022, at Legacy Living and Rehabilitation, of natural causes. Katherine Oney was born July 24,1944 in San Diego, California to Walter and Delia Bowman. The 10th of 12 children Katie grew up in Cardiff by the Sea, California and graduated from Point Loma High School in San Diego. As a young teenager, Katie met Robert Palmer and they married on January 25,1963. Katie and Bob had four children, Peter, Matthew, Andrew and Roberta. In February of 1976, the family moved from California to Gillette, Wyoming. Katie's love of children touched the lives of many in her new community. She was a constant fixture in youth baseball supporting her kids as they progressed. Operating her in-home daycare, she quickly became known as "Aunt Katie" and later "Grandma Katie" to multiple generations of children that she cared for. Her involvement with vacation Bible school, St. Matthew's Sunday School, and her annual portrayal of Mrs. Claus, beside Bob, as Santa brought countless joy within the community. Katie and Bob spent nearly 57 years married, when Bob passed away in 2019.Katie is survived by her four children and by her ten grandchildren and ten great grandchildren. She is also survived by her sister, Rosemary, and brother, Harry, and numerous nieces and nephews. She was also preceded in death by her parents and 9 siblings. Memorials are suggested in Katie's name to Blessings in a Backpack https://www.blessingsinabackpack.org/. Memorials and condolences may be sent in care of Gillette Memorial Chapel 210 West 5th Street, Gillette, WY 82716. Condolences may also be expressed at www.gillettememorialchapel.com

To order memorial trees or send flowers to the family in memory of Katherine O. Palmer, please visit our flower store.