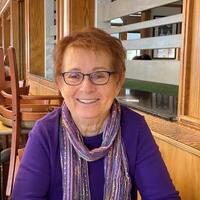 Funeral Services for Judie Charlene Krenning Howe, 71, will be Thursday, April 8, 2021 at 11:00 am at St. Matthew’s Catholic Church in Gillette, Father Cliff Jacobson officiating; interment to follow at Mt. Pisgah Cemetery. Judie was a caring wife, mother, grandmother, sister, and friend.  She left this world peacefully on March 31, 2021. She was surrounded by her loving family. Judie was the 11th of 19 children born to Carl and Amelia (Weber) Krenning on August 8, 1949, in Worland, Wyoming and was the first of her siblings to be born in a hospital. She graduated from Cody High School in 1969.  In May 1971, she married Eddie (Ed) Howe in Cody, Wyoming.  While they made their life in Cody, she worked at the Husky Refinery.  They welcomed their first son, Jeffrey Carl on December 31, 1973. Their second son, Christopher Ernest was born on August 15, 1977.  In 1979, Ed’s work took them to Aztec, NM. Kyle Todd, their third son, was born on July 7, 1981.  Shortly after his birth, Ed and Judie moved to Gillette, Wyoming. During their years in Gillette she operated an in-home daycare, worked for Dr. Otis Clements, Gillette Optometric, Campbell County WIC, and Campbell County Public Health.  Judie retired in October of 2016, although they couldn’t keep her away.  She could often be seen there on shot clinic days helping out. Many would say that there wasn’t anything Judie was prouder of than her three sons, which was true until her grandchildren were born.  Judie loved her grandson, Patrick, and cheered him on regularly as he competed in Special Olympics. She often traveled to Florida to visit her grandson, Steele, and granddaughter, Pierce and to New Hampshire to visit her youngest grandson, Vance. Judie’s favorite time of year was any holiday.  She loved decorating her home.  She took great pride making sure it was welcoming and festive for each holiday, especially the front yard for everyone to enjoy.  Judie also enjoyed baking and cooking, her friends and family could always count on her for a homemade sweet treat. She was an avid traveler and had traveled the country coast to coast. From Hawaii to cruising the seas, her favorite place to travel was always Cody, WY.  Judie is survived by her children - Jeff (Jami) of Gillette; Chris (Melissa) of Winter Park, FL; and Kyle of Nashua, NH; grandchildren - Patrick Howe of Gillette; Steele and Piece Howe of Winter Park, FL; and Vance Howe of Nashua, NH; Dogs, Jasmine and Cooper; Sisters-Betty Singley of Little Rock, AR; Shirley Hodsen of Cody, WY; Mary Jane (Tom) Saunders of Akron, OH; Patty Krenning of Cody; Sandie Jones of Cody; Vickie Ross of Cheyenne, WY; Carl (Sandie) Krenning Jr. of Camrose, Alberta Canada; Karen Gimmeson of Billings, MT; Ronnie (Mary Lee) Krenning of Belfry, MT; Jack Krenning of Powell, WY; Sally Henderson of Cody, WY; Steve Krenning of Cody; Debbie (Gene) Gibson of Bozeman, MT; Doug Krenning of Cody, WY; and Sheila Wolf of Roy, Utah. She was preceded in death by the love of her life, husband, Eddie Howe; her parents, Carl and Millie Krenning; and brothers, Mike, Terry, and Jerry. In lieu of flowers, a display at Campbell County Festival of Lights will be sponsored in memory of Judie.  Memorials and condolences may be sent to Gillette Memorial Chapel 210 West 5th Street, Gillette, WY 82716. Condolences may also be expressed at www.gillettememorialchapel.com

To order memorial trees or send flowers to the family in memory of Judie Charlene Howe, please visit our flower store.