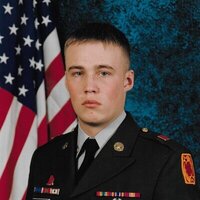 Joshua Wayne Irish, 35, was called home by his Lord and Savior Jesus Christ and into the arms of his Heavenly Father, Thursday, October 15, 2020. He passed away at Campbell County Health while surrounded by his loving family. Born on January 31, 1985 in Gillette, Josh was raised throughout eastern Wyoming by his parents Jeffrey and Frances (Smith) Irish along with his three siblings, Monica, Steffany and Kevin Irish. Growing up he was involved in many sports including soccer, track, football and basketball. Josh also enjoyed music, singing in choir throughout junior high and high school, and playing drums and percussion in band. In Junior High his choir teacher often said he had the “pipes of an angel”, she inspired and encouraged him, giving him a deeper love for singing that he carried throughout his life. Continuing his musical ability as an adult Josh taught himself how to play the guitar often looking up chords to popular songs and trying his hand to create his own music. In 2004 Josh graduated from Douglas High School and enlisted in the U.S. Army by June of that year. With his basic training date postponed he moved to Lake Geneva, WI and worked at Toyota in Fox Lake, IL as a detailer. Josh reported for basic training at Ft. Benning, GA in October 2004 and completed his training on December 2004. He went on to AIT at Ft. Bliss, TX, and became a Patriot Missile Operator/Maintainer. The military took Josh overseas where he was stationed in Ansbach, Germany for 4 years. While living in Germany Josh met his future wife, Elena (Daum) Irish. They would later marry in 2009 through 2019. After Josh completed his active duty in 2008. He returned to the U.S. and began working at Antelope Coal Mine where he worked in production and utility for 10 years. Josh had worked at the mine just one year when he was recalled by the Army during his inactive reserve service. Sent to the Middle East, Josh was stationed at Camp Victory in Iraq and was there for one year. Throughout his dedicated military service Josh earned an Army Commendation Medal, an Army Achievement Medal, a Good Conduct medal, a National Defense Service Medal, a Global War on Terrorism Service Medal, and an Iraq Campaign Medal with 2 stars. When Josh completed his tour in Iraq he and Elena returned to the states and moved to Gillette, WY. Josh found that he most enjoyed the community by serving God and others through his church, New Life Wesleyan. He also made connections through the Gillette Rec Center, utilizing all it had to offer. As a young man he enjoyed traveling to experience the beauty of Wyoming and its surrounding states, as well as taking a trip to Cabo, and revisiting Germany. He was currently enrolled in his second semester at Gillette Community College. Josh was pursuing a future in the electrical field. By far one of Josh’s greatest joys was becoming a father to his daughter Lydia Dee, who Josh affectionately nicknamed “Schnecklein” meaning “snail” in Deutsch, however she is anything but snail-like, Lydia came into this world as a force to be reckoned with, just like her dad, her “papa”. Both energetic, strong-willed, and determined Lydia is often said to remind others “so much of Josh” and bears a striking resemblance to her dad when he was young. Joshua was a man who sought after God’s heart, earnestly seeking Him, eager to learn, memorize, and understand God’s holy word. God pursued Josh’s heart right back. His favorite song “Reckless Love” echoes this beautiful pursuit with words that were imprinted on Josh’s heart and mind; “The overwhelming, never-ending, reckless love of God, it chases me down, fights ‘til I’m found, leaves the ninety-nine. I couldn’t earn it, I don’t deserve it, still you gave yourself away, Oh the overwhelming, never-ending reckless love of God.” As Josh took his last breath God’s reckless love rescued him once more and carried him home through Heaven’s gates. God blessed us with a great man, a wonderful son, brother, and friend, a sweet soul with a sparkle in his eye; unique, blessed, treasured, and adored, worthy and called for a divine purpose by our Lord and Savior. Thank you, Lord, for 35 beautiful years. Josh is preceded in death by his maternal grandparents, James and Darlene (Morgan) Smith, paternal Grandfather Dwight Irish and cousin Steven Bechtel.

To order memorial trees or send flowers to the family in memory of Joshua Wayne Irish, please visit our flower store.