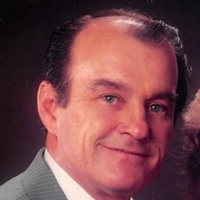 Mass of Christian Burial for Joseph Sindelar will be held at 10:00 a.m., Friday, November 2, 2018 at St. Matthew’s Catholic Church  with Father Augustine officiating; interment to follow at Mt. Pisgah Cemetery. Rosary will take place at 3:30 p.m., Thursday, November 1, 2018 at Gillette Memorial Chapel, followed by public visitation from 4:00 p.m. to 7:00 p.m. Joseph “Joe” Herman Sindelar, 82, of Gillette, Wyoming died Saturday, October 27, 2018 with his family by his side. Joe was born in Gering, Nebraska to the late Ralph and Mary Bernadine (Lager) Sindelar on October 16, 1936. Joe spent his childhood helping on the family farm and went on to serve in the U.S. Army as a paratrooper. He later worked in the oilfield as a driller, primarily for Exeter Drilling, eventually settling in Gillette where he lived most of his adult life. It was there Joseph met his beloved wife, Alice Sindelar, to whom he was married for 39 years. Joseph enjoyed fishing, hunting, and camping with his kids and grandchildren. He also enjoyed his time coaching youth boxing. On any given day, you could catch Joe watching old westerns or a football game. Joe was a devoted husband, father, and grandfather; he especially loved having his grandchildren around him so he could spoil them and sneak them cookies or chocolate bars. Joseph is survived by his children, Michael (Abby) Sindelar; Tanya (Jesse) Kimbley; Jason Sindelar; Joseph “Joey” Sindelar; Jannette Allbert; Penny Jo Nipper; and Pamuela Lewis; grandchildren, Todd; Zachary; and Joseph Sindelar; Courtney Henley; Alicia Jones; Lanae Kimbley; Maya Sindelar-Sarver; and Kaden Sindelar; great-grandchildren, Liam Wrenn and Brynlynn Henley; sister, Deloras Dermer; brothers, Daniel Sindelar and Samuel Cochran; as well as extended relatives and a number of friends. Joseph was preceded in death by his wife, mother, father, step-father, Fred Cochran, and four brothers, John, James, and George Sindelar and Stephen Cochran. Memorials and condolences may be sent in Joe’s name in care of Gillette Memorial Chapel 210 West 5th Street, Gillette, WY 82716. Condolences may also be expressed at www.gillettememorialchapel.com

To order memorial trees or send flowers to the family in memory of Joseph Herman Sindelar, please visit our flower store.