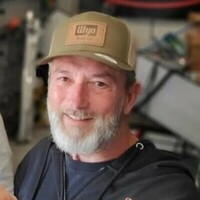 Jack, as he was always known, passed away October 19, 2020 in Gillette, Wyoming of a severe cardiac event (unrelated to coronavirus). He was born on October 4,1955, in Jacksonville, North Carolina ( Camp LeJeune). Jack was the second of eight children born to William and Helen Spence. His early life followed the typical journey of a Navy Brat. As his father was re-assigned from base to base, the family moved every few years. This meant new living quarters, new schools and churches, new neighborhoods and new friends. It may have been a challenging beginning in his life, but it was one that instilled the love of travel Jack felt throughout his life. In 1966 Jack's father retired from the Navy. The Spence family settled in Oneonta, New York, the city where his father was born and raised. And it was Oneonta that we always called home. Jack attended St Mary's Catholic School and Oneonta High School. He then swiftly set off for the Marine Corps and finished his education in Florida, at Daytona Beach Community College. He majored in microprocessor analysis and programming. He excelled in everything computer and loved it. Jack married and had two sons, Christopher and Anthony. He continued honing his computer skills while working at Seimens - StrombergCarlson. To no one's surprise, Jack became restless and left the corporate world behind. This led to many changes in his life. Eventually Jack found his way to the greater Orlando recovery group. He spent several years in the Orlando/Sanford area devoting himself to recovery, spirituality and service. Jack fully embraced these tenets, giving back to those who freely gave to him. He used his knowledge in computer programming to help update and rewrite the Greater Orlando Chapter of NA website. That was many years ago and the website is still in service today. Jack proudly celebrated 25 years in recovery in September 2020. Ever the rolling stone (he loved music - especially early rock) Jack became restless again for new adventures. He was mentored in a new trade that would fulfill two of his greatest loves, traveling and meeting new people. He learned the business of auto dent repair. He loved the whole concept, weather watching in anticipation of storms to chase, looking for areas where there would be hail damage. He would reach out to fellow dent repair friends and they would meet up in new cities where opportunity was abundant. Shops would be set up, repairs completed, and money made. Jack worked hard certain months of the year and took nice long breaks when his wallet allowed him to. He truly was a rolling stone, never staying in one place too long. Jack's last stop was in Gillette, Wyoming. He absolutely loved it there. The people took him in as one of their own. They introduced him to things he had never done before. The excitement of going on a cattle drive...on four wheelers was a highlight of his life (so we hear). He went to Sturgis with his new friends and camped at Devil'sTower. He found great peace and fellowship in Gillette and decided to stay. Jack had just turned 65 and looked forward to working less while collecting his pension from Seimens and getting his Social Security and Medicare. The family would like to thank the people that welcomed our brother into their lives over the years. We will never know all the people that knew and loved Jack, but we would like to extend a special shout out to the people in Wyoming. They loved Jack and took care of him after his 2nd heart attack. Johnny and Michael and the rest of the crew selflessly gave their time to help get Jack back home with us. Thank you. Jack is survived by his son Anthony and his two beloved grandchildren, Ginifer and Anthony. Jack's oldest son, Christopher predeceased him as did his parents, Helen and Bill Spence and his youngest brother Doug. He is also survived by six siblings, Sue, (Stephen) Mike, Steve, Billy, Kathy, and Patty-Jo. There are numerous aunts, an uncle, nieces, nephews, and so many cousins to mention by name. He leaves behind two ex-wives and devoted friends, Denise and Valerie. Of course, he leaves behind many friends the family knew and the many friends we will never know. We do know you were there, and we thank you for loving our brother. Because of Covid19 we will be having a graveside service, in the Remembrance Garden at Volusia Memorial Park. We will post a firm date, possibly in March (in hopes the coronavirus has waned). In lieu of flowers please donate to: The American Heart Association, The Cystic Fibrosis Foundation, or the Charity of Your Choice

To order memorial trees or send flowers to the family in memory of John Francis Spence, please visit our flower store.