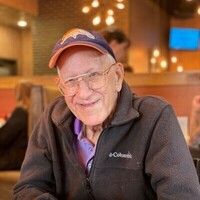 Mass of Christian Burial for John Rothleutner will be held at 11:00 a.m., Monday, April 18, 2022 at St. Matthew’s Catholic Church with Father Cliff Jacobson officiating; interment to follow at Mt. Pisgah Cemetery. Visitation at Gillette Memorial Chapel on Wednesday April 13 from 4:00-6:00 p.m immediately followed by the Rosary.  On April 10, 2022 John Michael Rothleutner passed away surrounded by a multitude of, noisy, prayerful, loving family members at Campbell County Health. John and his twin sister Joanne were born on October 29, 1939 to Frank and Clara Rothleutner in Douglas, WY. He was raised on the family ranch in Converse County along with his twelve siblings - six brothers and six sisters. The ranch was an all-hands-on deck operation with everyone, parents and children taking part in the work necessary to run a large sheep and cattle business. His work ethic was honed with hard work completed the right way without complaint. After graduating from Converse County High School he attended the Nation School of Business in Rapid City SD. John and his brother Bob met sisters Evelyn and Eddie when Evelyn played steel guitar in a band with her Dad at the old 4-H Hall Skunk Hollow near Dewey, SD. Bob and Eddie were married on March 7, 1959 and John and Evelyn followed two months later on May 23, 1959. He learned to play bass guitar and he and Evelyn played for many years in various country and western bands. Both continued to play their instruments throughout their life. This example rubbed off and inspired all of their children to play instruments themselves. John and Evelyn always had their instruments set up and ready to play in the dining room of their home. On May 29, 1960, their first child, Debbie was born followed by Mike on December 19, 1962, Wendy on December 23, 1965 and Jenni September 12, 1970. They settled in Gillette, WY in 1970 where John became part owner and eventually full owner of Gamble Hardware. Gambles then became Hardware Hank. He ran the store in two locations on Gillette Avenue and retired in 2014. He sold the store to his son Mike. He was not satisfied retiring and after remodeling their house, his need for activity had him going back to work for Mike part(ish)-time. His Evy, his endearing name for Evelyn, and his family, along with his Catholic faith were the most important things in his life. He and Evelyn had a deep devotion to the Blessed Mother and recited the rosary together daily. Each of his children and grandchildren had a unique, deeply meaningful relationship with him. All of his kids, and many grandkids had the privilege of working for and alongside him at the hardware store. Stories have been shared of sharing thousands of cups of coffee, DIY and building projects planned and completed, digging in the dirt, planting roses, fixing anything with zip ties and duct tape. They shared common interests in things like sunshine, ice cream and roses. Words were shared that show the character they witnessed and learned from their dad and grandfather like loving and caring, wisdom, unconditional support, devoted, love, strength, deeply rooted values, perseverance, integrity and honesty, work ethic and amazing role model. His granddaughter Heather shared this thought on his passing. “If God knows how to really create paradise for him, he’ll make the pearly gates extra squeaky, so he has something to fix right away.” He is survived by his beloved wife Evelyn, four children daughter Debbie (Roy) and their children Brandon (Amber), Brian, Heather (Adam) and Abby and great-grandchildren Delaney, Halle, Cami, Leah and Colin; son Mike (Robynn) and their children Nicki (Troy), Michelle (Robert), Forrest (Erin) and Avery (Emily) and great-grandchildren Shaelynn, Maeleigh, Leo, Armando, Dixie, Lola, Reuben, Ezra; daughter Wendy (Dan) and their children Amanda (Bertine), Angela (Kelton), Melanie, Andrew (Kasey), Tim (Brynn) and Allison and great-grandchildren Giselle, Drake, Channing, Carter, and Reid; Jennifer (Dan) and their children Katrina, Ian, David, Sarah and Mary and great-grandchildren Santana, Solana and Sienna. He is also survived by siblings Joanne, Hattie, Theresa, Fred and Barbara and many MANY nieces and nephews. John was preceded in death by his parents Frank and Clara, siblings Leo, Frank, Robert, William, David, Mary, and Carolyn and his infant great-grandson Marcus. Memorials and condolences may be sent in care of Gillette Memorial Chapel 210 West 5th Street, Gillette, WY 82716. Condolences may also be expressed at www.gillettmemorialchapel.com

To order memorial trees or send flowers to the family in memory of John Michael Rothleutner, please visit our flower store.