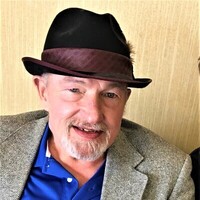 John Arthur Mravlja was born on February 24, 1946 in Cooperstown, NY to Anton Mravlja and Eleanor (Albrecht) Mravlja. He attended high school at Andrew S. Draper in Schenevus, NY and graduated college from The College of Saint Rose in Albany, NY with a degree in accounting. John spent his youth growing up in Westford, NY, where he was the oldest of five children. He served in the Army from December 1967 to August 1969 and was deployed to Vietnam. John’s father learned the trade of masonry while building railroad trestles and taught the trade to him.  John worked in the construction field most of his life. He married Jule Engle in 1971 and two daughters were born to them (Jody and Jennifer). They later divorced. In 1976, John moved his family to Gillette, WY and worked construction. He started his own business in 1978 and later worked for several construction companies in Gillette. He met Connie Allen, his companion of 34 years, in 1987, and they became inseparable. In later years, John returned to his accounting background and worked for several companies doing bookkeeping. He retired in 2012. John enjoyed the outdoors and was often camping, fishing, golfing, or hunting. He was a very good cook and was constantly trying new recipes and techniques. He loved visiting with his friends and acquaintances. John was always willing to lend a helping hand to anyone who needed it. John was a die-hard Buffalo Bills fan. John is survived by his companion, Connie Allen; sister Marilyn(Bob) MacLean; brothers, Peter Mravlja (Anka Wilkins) and Andy (Nina) Mravlja; daughters, Jody (David) Bucknam and Jennifer (Joe) Bowden; stepchildren, Tony (Sherry) Castro; Rikilynn Oedekoven (Mike Rohrich); Bruce (Tammie) Allen; grandchildren, Logan and Kyle Bucknam, Paige (Jonathan) Edwards, TJ and Justin Castro, Shelby (Steven) Phillips, Kennedy Bradley and Erik (Cynthia) Odekoven, Austin, Shayelyn, Kaden, Logan, and Sophia Allen,  great-grandchildren, Violet and Juniper Edwards, Zaryah and Tityn Phillips, Braxton and Reign Oedekoven, along with numerous cousins, nieces, and nephews. John was preceded in death by his brother, Thomas Mravlja and parents Anton and Eleanor Mravlja. In lieu of flowers, a memorial has been set up at Gillette Memorial Chapel for donations to the family to offset expenses. Memorials and condolences may be sent in care of Gillette Memorial Chapel 210 West 5th Street, Gillette, WY 82716. Condolences may also be expressed at www.gillettememorialchapel.com

To order memorial trees or send flowers to the family in memory of John Arthur Mravlja, please visit our flower store.