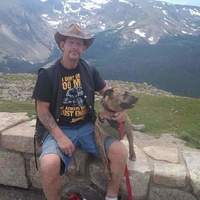 John Raymond Ledoux, age 54 Born May 19, 1965 Went to be with the lord on Feb.4th 2020 at 3am in Gillette, Wy. He passed away peacefully after a long battle of end stage liver failure. John was born in La Grande, OR. and grew up in Cove, Or. He was known to be a fun loving, god fearing, family man! He was a carpenter by trade, who had a god given gift of crafting with wood and blessing people with his unique gifts and talents. He was a singer, songwriter, poet and musician! John loved the outdoors and enjoyed camping with his family and friends. He welcomed everyone as if they were blood and had a heart of compassion for those in need; both human and animal. John was preceded in death by his mother Nancy Louise Schaffort and father Andre` George Ledoux. Survived by sister Dianne Louise Hendrix (Ledoux) and daughters Kara Danielle Ledoux, Shaunah Raye Stevens and Becky Lynn Stevens. John is also survived by his 9 grandchildren. He cherished them with all of his heart. Memorial services will be held in Oregon later in the year to celebrate the life of his kind soul. Those who hope in the lord, will renew their strength; they will soar on wings like eagles; they will run and not grow weary; they will walk and not be faint. Isaiah 40:31. Memorials and condolences may be sent in care of Gillette Memorial Chapel 210 West 5th Street, Gillette, WY 82716. Condolences may also be expressed at www.gillettememorialchapel.com

To order memorial trees or send flowers to the family in memory of John Raymond Ledoux, please visit our flower store.