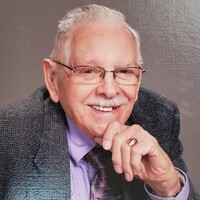 John David Burger, Sr. (Jack) passed away peacefully on Friday, April 24, 2020 of causes incident to age. Jack was the youngest son of Earle Leigh Burger and Doris Mae (Bullock) Burger, born October 13, 1934 in Gary, Indiana. Jack married Glenda Rae Griffith in August of 1955, and from this union came seven children, two of whom have preceded him in death, Donald Allen and Cynthia Leigh. Jack and Glenda divorced in 1969, and he met the love of his life, Peggy Joy Lamberg Lee on July 4, 1976, who had two children from a previous marriage. Peggy passed away in 1989 of colon cancer, and he still mourned her death after 30 years. His stepchildren still treasure their memories of him. Jack served in the Army Reserves and finished his service as Staff Sergeant. He is known for his patriotism and support for the armed forces. Jack spent most of his working career as a dental technician and established his own business, Burger Dental Studio, in 1974. He continued as a dental technician, specializing in crowns and bridges, until his retirement in the spring 2012 when he moved to Wyoming. Jack made dozens of friends at the Campbell County Senior Center and is well known for his gentle nature and quick smile. He often went to a local florist and picked up flowers that were too old to sell, but still had plenty of life and beauty to them, brought them to the Senior Center and distributed them to his friends. This little act of kindness didn’t cost him a dime, but it was an invaluable gift of kindness to the recipients. Jack was part of the Lion’s Club for over 27 years, having begun his affiliation with the Lion in 1993 in Indiana. He loved to participate in the fundraiser breakfasts and Turkey Shoots that the local chapter of the Lions sponsored. Jack is an avid Chicago Cubs fan and watched every game he could. He often came out to Denver to join his family for the Colorado Rockies/Chicago Cubs games. Even though his son cheered the Rockies, it didn’t dampen his enthusiasm for the Cubs. Jack is known for his Cubs jacket and battery-powered flashing Cubs baseball cap. Jack is preceded in death by his parents, his older brothers, Robert and Charles, younger sister, Jane, son, Donald, and his daughter, Cynthia. He is survived by his sons, John Jr. (Sophia), Raymond (Dawn), Jeffery (Mary), his daughters, Laura (Norris Barrow) and Kathryn (Micheal Fadely), stepson, Darin Lee (Roberta), stepdaughter, Dawn Lee Marciniak, 27 grandchildren, and 47 great-grandchildren and counting. He will be missed by many friends in Gillette and Moorcroft. Memorials and condolences may be sent in care of Walker Funeral Home 410 Medical Arts Court, Gillette, WY 82716. Condolences may also be expressed at www.walkerfuneralgillette.com

To order memorial trees or send flowers to the family in memory of John "Jack" David Burger, please visit our flower store.