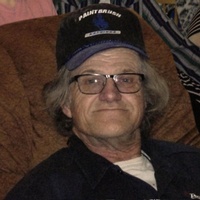 A Celebration of Life for John Dowell will take place on Saturday, March 30, 2019 at Mt. Pisgah Cemetery at 11:00 a.m. In lieu of flowers please consider making a donation to Infinite Hero in John’s name.

John Wesley Dowell left this Earth on March 26, 2019. John was born April 13, 1959 in Oklahoma.  His family moved to Kansas for a time before moving to Gillette in 1971. John graduated high school in 1977, the fourth class to graduate from the current Campbell County High School building. It was there he first met and dated Donna England. After high school John enlisted in the Navy and spent 3 years serving his country.

After his short stay in California John returned to Wyoming and met and married Gaylon “Shorty” Glenn in 1985.  They divorced not long after, and John reconnected with Donna in 1991. They were married in 1992, and Donna’s two children, James and Brianna, adopted John quickly. Even after their divorce in 2008, John remained close to his kids.

John was a believer in longevity and commitment, and nowhere was this truer than his work life. In his adult life John proudly worked only 2 jobs, at Wackenhut Security from 1982-1999, and most recently with Slattery Enterprises Paintbrush Sanitation from 1999-2019. John thought of Tim, Mark, Teri as family.

John enjoyed the outdoors, watching and attending drag races, and most of all, his family. He is preceded in death by his parents and grandparents. He is survived by brothers, Keith (Tami) Chrans; Mike (Denise) Walter; sister, Cyndi (Joseph) Foulks; niece, Sarah Walter; son, James (Samantha) Soesbe; daughter, Brianna (Joshua) Ingersoll; grandchildren, Baylie, Daisy, Pepper, Weston, Dustin, Ian and Charlotte; and numerous nieces and nephews. Memorials and condolences may be sent in care of Walker Funeral Home 410 Medical Arts Court, Gillette, WY 82716. Condolences may also be expressed at www.walkerfuneralgillette.com

To order memorial trees or send flowers to the family in memory of John Wesley Dowell, please visit our flower store.