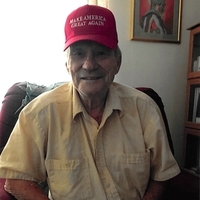 Funeral service for John Baker will be held at 10:00 a.m., Saturday, October 10, 2020 at Walker Funeral Home; interment to follow at Mt. Pisgah Cemetery. Visitation will be held from 4:00 p.m. to 7:00 p.m., Friday, October 9, 2020 at Walker Funeral Home. John Baker, 86, a lifetime-resident of Campbell County, passed away Tuesday, October 6, 2020 at The Legacy Living and Rehabilitation Center. John Baker was born in Lauver, WY on February 15, 1934 to Edgar Hamilton “Ham” and Ioris (Winland) Baker. He went to country school near the homestead for his first five years; then to Rozet High School where he graduated in 1953. Following high school, he enlisted in the US Navy from 1955 to 1961. After the service he returned to Gillette. In 1963, John married Vivian Morrison. They made Gillette their home. John worked as a carpenter until 1980; at which time he went to work at Campbell County Courthouse as a maintenance supervisor. John worked there until he retired in 1994. John is survived by his sons, Gary Baker and Gordon Baker; daughter, Vickie (Marc) Harbaugh; grandsons, Branden Baker, Tyler Harbaugh; granddaughters, Brittany Baker, Jennifer Baker, Natasha Christean, and Chantel Baker; great-grandchildren, Jeffery Baker, Caleb Christean, Sophia Baker, Abigail Baker and Saber Baker; and numerous nieces and nephews. He is preceded in death by his wife, Vivian; his parents, Edgar “Ham” and Ioris Baker- Engdahl; brothers, Cliff Baker and Hugh Baker; sisters, Irene Moser, Ann Rodgers, Ethel Baker and infant-daughter, Diane Baker. The family request that memorials be made to benefit Disabled Veterans. Memorials and condolences may be sent in care of Gillette Memorial Chapel. 210 West 5th St. Gillette, WY 82716. Condolences may also be expressed at www.gillettememorialchapel.com

To order memorial trees or send flowers to the family in memory of John Henry Baker, please visit our flower store.