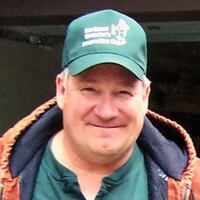 Funeral services for Jim Knutson, 63, of Gillette, will be alongside his father, 10:00 am, Tuesday, November 2, 2021 at the American Legion Post #42.  Visitation will be from 4-7 pm, Monday, November 1, 2021 at Gillette Memorial Chapel.  Interment will be in Mt. Pisgah Cemetery Wednesday, November 3, 2021 at 2:00 p.m. Jim went home to be with the Lord on October 30, 2021. Jimmy Mitchell Knutson, known to his family and friends as Jim, was born April 4, 1958 in Hot Springs, South Dakota, the son of Roy and Lorene (Sonne) Knutson.   He grew up in Newcastle until he moved with his family to Gillette in 1968.  He finished his schooling in Gillette, graduating from Campbell County High School in 1977. After school Jim went to work on different jobs. When he was a driller on a core drilling rig, he traveled all over the Western United States.  When he came back to town for a few days off, he would tell his family and friends all about his travels and the neat things he saw.  He next went to work for his dad drilling water wells in Northeast, Wyoming until he got a job at Thunder Basin Coal Mine and from there to NARM.  Jim was in an accident there that caused him to retire. Jim was happily involved with Jo Rempfer for the last 20 years of his life.  Together they kept each other happy with everything they did together and their love for each other. One of his favorite pastimes was mining gold, mostly in the Black Hills.  He was a member of both the Northeast Wyoming Prospecting Club and the Northern Hills Prospectors.  He enjoyed the outings and trying to get more people involved.  He was also a life member of the National Rifle Association.  Jim was proud of his father’s service and joined the Sons of the American Legion.  He always enjoyed playing and teasing all his nieces and nephews when they were young and has always been the favorite uncle, up until the time of his death.  Jim will be missed by his ever-loving sweetheart Jo; brothers: Kevin (Marcia) Knutson and Butch (Deb) Knutson; several nieces and nephews.  He is preceded in death by his parents: Roy and Rene and sister, Susie. Memorials and condolences may be sent in care of Gillette Memorial Chapel 210 West 5th Street, Gillette, WY 82716. Condolences may also be expressed at www.gillettememorialchapel.com

To order memorial trees or send flowers to the family in memory of Jim M. Knutson, please visit our flower store.