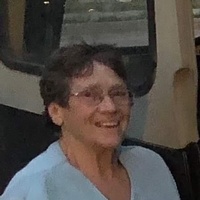 Jeraldine Diane Lord, age 76, of Gillette, WY passed away Sunday January 27, 2019 at Rapid City Regional Hospital, Rapid City, SD of heart related illness. Jeri was born February 12, 1942 in Mobridge, SD the daughter of Edward and Diane (Bauman) Voegele.  She grew up and attended school in Mobridge until the death of her then single mother in 1953.  From that point on Jeri left school to help raise her seven siblings.  In 1961 she married Merle Schaible and they had five children together.  They lived in Mobridge until moving to Watertown, SD in 1967.  The couple would later divorce. In 1978 Jeri moved to Gillette, WY with her five children where she met and married Sam Lord in 1984. They also would later divorce. Jeri worked at Kerr-McGee Mine where she worked hard and put in many hours at the mine to provide for her children.  When she was not working she enjoyed taking care of her plants and her pets as well as being a member of the Moose Club. Jeri is survived by her children, Roxanne Schaible Studer; Tina Marie Stout; Kirt Allen Schaible; Paula Kay Schaible; and Dane Roy Schaible all of Gillette, WY; as well as by eight grandchildren and one great-grandchild. She was preceded in death by her parents, and by her niece, Rhonda Scharberd. Memorials and condolences may be sent in Jeri’s name in care of the Walker Funeral Home 410 Medical Arts Ct, Gillette, WY 82716. Condolences may also be sent via the tribute site at www.walkerfuneralgillette.com

To order memorial trees or send flowers to the family in memory of Jeraldine Diane Lord, please visit our flower store.