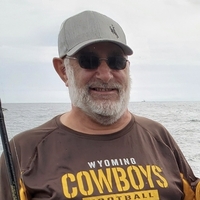 Funeral services for Jeff Bryant will be held at 10:00 a.m., Wednesday, November 3, 2021 at Gillette Memorial Chapel; interment to follow at Mt. Pisgah Cemetery. There will be a luncheon at The Ramada after interment. Visitation will be held from 4:00 p.m. to 7:00 p.m., Tuesday, November 2, 2021 at Gillette Memorial Chapel.  Jeff Bryant was born on August 9, 1956 in Litchfield Minnesota, to Dorothy Schiro. He was raised by Dorothy and her husband Melvin Schiro. Jeff left this earth on October 27, 2021. Jeff grew up working on the family farm in Minnesota and causing a lot of trouble with his 7 siblings. (Jim, Jon, Jeanne, Julie, Joann, Jerry and Buck.) There was always work to be done on the farm. This taught Jeff and his siblings the value of hard work and how important family is. He spent his life teaching everyone this important message. After faking his high school graduation Jeff left Minnesota following some of his siblings to the Gillette area to work in the oilfield. Wyoming became his home. He spent most of his life working for Cyclone Drilling. He started at the very bottom and retired as a Legend in his field in 2020. In 1976 Jeff met the love of his life Cheryl “Red“(Jaeger). The two married March 12, 1977. They spent much of their early marriage attending numerous concerts and working to build the house they grew their family in. Cheryl left this earth to prepare a place for Jeff in heaven on June 14,2019. They had four children together in their 42 years of marriage. Erin Francis, Ashley (James) Newman, Bailey (Casey) Alexander, and Dale, bonus daughter Amy Saxton. Jeff devoted his life to giving these four kids a better life than he had growing up. They will always remember the many trips down rig roads to see their dad. He worked very hard but always made sure to be around for the important stuff. Whether that meant driving around snow barriers to get home for birthdays or a 16-hour drive to watch a championship game. He taught his children how to work hard and always help if you can. Later in life Jeff was able to spend time doing things he enjoyed with his children. These included travelling, hunting, and many fishing trips to Alaska. He loved getting to see new parts of the world. The family attended several University of Wyoming Football and Basketball games together with the CSU vs Wyoming game being his favorite. He also enjoyed gardening and spending time with his father-in-law Dale Jaeger. He loved watching sports on TV and following the many things his children were involved in. Going to see them wherever in the world they ended up. Jeff began his favorite chapter in life when he became a Grandpa to his grandkids, Dalton, Laney, Gianni, and Carmine. Bonus grandkid Cash. Jeff and the grandkids meant more to each other than words could ever say. He was at every game or event they had supporting any interest they decided to pursue. Standing on the sidelines to sneak in a middle finger was something Jeff lived for. This was the symbol for I love you to them. Jeff loved messing with the kids and teaching them everything a grandpa should never teach a child. Taking each grandchild on a separate fishing trip to Alaska is one of the many fond memories they will forever have of him. If you asked any of the grandkids what they wanted to do they would always say “Let’s go to Grandpas”. He was always a phone call away for questions they couldn’t ask their parents or to help hide the trouble they would get themselves in. Frequent sleepovers with morning trips to Robertos for breakfast and just hanging out were some of their favorite things to do together. He just loved having them around and spoiling them rotten. He was so proud of all of them for their many different accomplishments.

To order memorial trees or send flowers to the family in memory of Jeff Allen Bryant, please visit our flower store.