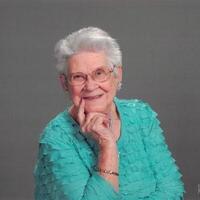 Jeanne was born March 27, 1927 to Claude F. and Gerildine V. (Scott) Scott in Shawnee, Oklahoma.  The family eventually moved to Albuquerque, New Mexico where she graduated high school and business school.  She then met the love of her life, Alonzo Jr. (A.J.) Crowley.  They were married on June 4, 1947 in a double wedding with his brother, Harold and her best friend, Sue.  They were blessed with three children, Sandy, Randy and Lonnie.  They moved around before settling in Kimball, Nebraska for fourteen years then they were transferred to Gillette in 1968 with Halliburton Services during the oil boom.  Jeanne always yearned to have a dress shop and the opportunity arose in 1976 when she opened Mode O Day Dress Shop which a few years later was renamed Fashion Crossroads.  She finally closed the doors in March of 2012.  She was very active in the Heart of Gillette, holding office as president and other offices.  She had a passion to make the downtown a great shopping area.  She was instrumental in starting the Parade of Lights downtown and dressed up as Mrs. Santa many times in the parade.  She even rode in on the train with Santa Clause several times.  She was an active longtime member in Beta Sigma Phi, and her favorite bridge club for many years.  She was also a member of the Auxiliary Post 42.  She loved spending time with her family, traveling and going camping.

She was preceded in death by her husband, both parents, brother Richard (Dick) Scott and son Randy Crowley.

To order memorial trees or send flowers to the family in memory of Jeanne Marie Crowley, please visit our flower store.