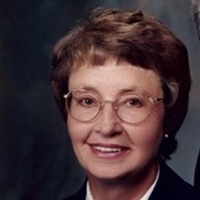 Funeral service for Jean Rindels will be held at 11:00 a.m., Thursday, December 13, 2018 at Trinity Lutheran Church with Pastor Jared Tucher officiating; interment to follow at Mt. Pisgah Cemetery. Jean Margaret Sladek Rindels, age 89, died peacefully on December 5, 2018 at Close to Home Hospice House in Gillette surrounded  and loved by her family. She was born on January 9, 1929 to Charles Frank Sladek and Emma Swanson Sladek, the son and daughter of Bohemian and Swedish immigrants, in a Sears, Roebuck and Co. mail order house built by her father on the family farm in Cleveland Township, Brule County near Pukwana, South Dakota. She joined brothers Vernon and Lyle and sisters Irene (Parkhurst) and Virginia (Jensen), and was followed by sister Wilma (Smith) and brother Charles. Her young brother Edward predeceased her. Jean attended a small rural school in Cleveland Township and graduated from Chamberlain High School in 1946. She attended the University of South Dakota in Vermillion for one year before transferring to South Dakota State College (SDSC) in Brookings. Jean loved her years with her siblings as SDSC, where she was elected May Day Queen and dated student body president and returning World War II veteran Richard H. Rindels. She graduated in 1950 with a degree in English Journalism. On August 5, 1951, Jean married Richard in Mitchell, SD, and loved him for 67 years until his death on February 2, 2018. She taught English at Pierre Junior School for two years until she and Richard took up farming for 12 years outside of Mitchell, where their seven children were born. In 1964, the family moved to Worland, Wyoming when Richard started working for the Federal Land Bank Association of Omaha. Jean taught elementary school for 27 years in Worland (1965-68), Kemmerer (1968-76), and Gillette, WY (1976-94). Following her retirement from teaching, she joined Boardwalk Real Estate in Gillette, where she had a successful second career as a real estate agent. In later decades, she and Richard spent winters at The Resort RV Park in Mesa, Arizona, where they enjoyed spending time with Jean’s sisters, Virginia and Wilma, and longtime friends, and engaging in a wide range of hobbies and artistic pursuits. Even in her later years, Jean could be spotted riding her bike to The Resort’s mailbox or playing in the Kitchen Band. Jean was hard working, selfless, and giving mother who raised six grateful children on canned garden produce, hand-sewn clothes, and homemade bread, while balancing a demanding career and community involvement. A child of the Great Depression and a member of The Greatest Generation, she had vivid memories of laboring on her family’s farm, stacking hay with a horse-drawn stacker; cooking for the threshers; shocking oat, wheat and barley; herding cattle; collecting ice sawn from a nearby pond to make homemade ice cream; and walking a mile and half through snowstorms to her country school. Jean showed her generosity and love for her family by her servant heart and a lifetime of hard work and self-sacrifice. She always shared what she had, took less than anyone else, and left the best for others. Her grown children never left home without a generous care package and packed lunch. She was an active volunteer in her church as a Sunday School and VBS teacher and member of the Lutheran Women’s Missionary League, choir, and altar guild, as well as numerous community organizations including Boy Scouts, Meals on Wheels, Soup Kitchen, Cam-Plex Ambassadors, and Campbell County Fair. Jean was a devoted member of Trinity Lutheran Church in Gillette for 42 years. She lived her life as a testimony to her deep and abiding faith and her confidence in the saving grace and abundant mercy of her Lord Jesus Christ. Her devotion to Richard and her children; her efforts to instill in her children knowledge and love of the Lord; and her lifelong service to her church and community reflected her strong Christian belief. Jean experienced God’s grace and lived her life in gratitude and celebration of the gift of His love and compassion, and with the assurance of His eternal mercy. Jean was preceded in death by an infant son, Douglas Paul Rindels. She is survived by son, Mark and his wife Yvette and children Ryan, Michelle and Matt; son, Brian and his wife Linda and children Lauren, Allison and Benjamin; son, Dean and his wife Alisa and children Kara and Curtis; daughter, Beth Scott and her husband Ken and children Roland, Eric, Jacob, and Sarah; son, Charles and his wife Marjorie and children Emma and Anna; and daughter, Jane Otts and her husband Phillip and children Olivia and Henry. She is also survived by eight great-grandchildren. Jean leaves behind two beloved sisters, Virginia Jensen and Wilma Smith. The family would like to thank the staff of Close to Home Hospice House and Primrose Retirement Community for their support of Jean during her final days, and to express their love and gratitude to their sister Beth for her help and loving care of their mom and dad for many years. In Jean’s memory, the family would appreciate in lieu of flowers that donations go to Council of Community Services (ccsgillette.org) or Trinity Lutheran Church (https://www.trinity-gillette.org/). Memorials and condolences may be sent in care of Gillette Memorial Chapel 210 West 5th Street, Gillette, WY 82716. Condolences may also be expressed at www.gillettememorialchapel.com

To order memorial trees or send flowers to the family in memory of Jean Margaret Rindels, please visit our flower store.