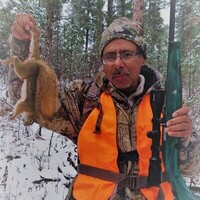 Mass of Christian Burial for Jason Jaramillo will be held at 11:00 a.m., Friday, November 19, 2021 at St. Matthew’s Catholic Church with Father Cliff Jacobson officiating. An all-night vigil will be held on Thursday, November 18, 2021 starting at 6:00 p.m., at St. Matthew’s Catholic Church. Jason Michael Jaramillo passed away on Sunday, November 14, 2021, at his home. Jason was born on October 27, 1971 in Riverton, Wyoming to Florencio (Chon) Carrizales and Nancy Carrizales. Jason moved to Gillette after marrying his wife, Sara Jaramillo, on June 23, 2001. They both had four children, Anthony (21), Nayeli (13), and Hunter (8). On June 09, 2016, their fourth baby, Emmanuel Ernesto Jaramillo, was born sleeping. He also adopted his brother and sister in-law, Jorge Jaramillo and Emily (Baron) Muller.

Jason had many joys in life. His greatest pride was his son Anthony. Although, not son by blood, Jason loved his son and raised him as his own. His proudest moment was when Anthony enrolled in the Army. The love for his children could be seen in Jason’s eyes as he was always willing to talk about his children to anyone that would listen. Jason loved everything outdoors. He loved going hunting in the Black Hills with Anthony and fishing and camping in the Grand Teton Mountains.

Jason is survived by his wife and his three children, his father, and many aunts, uncles, and cousins. He is preceded in death by his mother, Nancy Carrizales, his son Emmanuel, grandparents, and many cousins, aunts, and uncles.

Jason will always be loved and missed by many. Memorials and condolences may be sent in care of Walker Funeral Home, 410 Medical Arts Court, Gillette, WY 82716. Condolences may also be expressed at www.walkerfuneralgillette.com.

To order memorial trees or send flowers to the family in memory of Jason Michael Jaramillo, please visit our flower store.