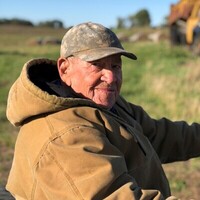 Funeral service for Jim Reeves will be held at 10:00 a.m., Wednesday, December 9, 2020 at Gillette Memorial Chapel; interment to follow at Mt. Pisgah Cemetery. Visitation will take place from 4:00 p.m. to 6:00 p.m., Tuesday, December 8, 2020 at Gillette Memorial Chapel.  A whole life condensed to a page, he was so much more than could fit on a page….. James Albert Reeves, “Jim” or “Jimmer”, as some may know him, was born September 27, 1926 to the late Fred and Eunice Reeves, a schoolteacher and homemaker, on a farm belonging to the family now for over a 100 years, near Pollock, Missouri.  He ran away from home at the age of 12 to go work for a local farmer, and at the beginning of WWII, had to return to the farm to ask for permission to go to war, since he was only 17.  He served in the Navy on the USS Kula Gulf CVE 108, and served in the Pacific.  He was Honorably Discharged on December 18, 1945. Dad was blessed with a large and loving family.  He married his sweetheart and classmate, Roma Moriarty on June 8, 1946.  Together they ran the family farm until 1959, when he came to Wyoming, to help with Reeves Concrete, and manage the plant here in Gillette.  Dad retired in 1975 to real estate investing, all the while buying back the pieces of the farm in Missouri, the plots that had been lost due to the Depression and financial hardship.  This was his pursuit all the days of his life, even checking out parcels while he was there in October of this year. He accomplished so many things with hard work and relentless determination.  We loved to hear his memories and there were so many.  One that would always make him chuckle: while in the service, he and a couple of his shipmates were able to sneak off the ship behind the sheep they were unloading, for a little R&R in that port of call, and were never caught.  He worked tirelessly pouring concrete and helping build many of the interstate highways around Wyoming.  And if you pass a guardrail that is anchored to the ground in Wyoming, you can thank him, he lobbied in Cheyenne for that, to protect drivers.  He caught rattlesnakes with his bare hands one summer, to sell for the anti-venom - an accomplishment which added to his legendary status, even if he didn’t talk about it.  He loved running dozers, backhoes, four-wheelers, and dump trucks.  He worked just as hard in retirement as in any other part of his life. And then there’s the cattle, he loved those darn four-legged creatures. He went back to full time ranching at the age of 76 in Moorcroft, WY.  We teased him, as we all had moved back to Gillette, if we all moved to Moorcroft, was he going to move to Hulett?  He would always laugh, but he never said no. He never complained, never talked about how his health was declining, he was always planning.  Planning on increasing the herd, or enlarging the farm, or wondering how to incorporate his own inventions into ranching…his constant working, loyal determination and common sense will be sorely missed in this world, and most especially by his friends and family.  He accepted Jesus as his Lord and Savior, Sunday, November 29, 2020 and went to his Heavenly home on Wednesday, December 2, 2020. James is survived by his sons, Ben Reeves and wife Lindy, grandchildren, Casey and Jamie, Ryan and Emily, and Jamie and Dusty Pedersen; James Reeves II and wife Micaela, grandchildren Thaen and Caeden; daughters, Deb Vergnani and husband Bob, grandchildren Paul and Beth, Steven, Jason and Michelle; Peggy Green and husband Wayne, grandchildren Isaac and Jen, Samuel and Stacy, Joshua and Amy and Shad; Heather Rodriguez and husband Bo, grandchildren Roma and Bowen;  Antoinette, Tiffany Reeves and Desiree Barnette; his great-grandchildren, Stella and Blake Reeves, Mariah, Allyssa, and Milania Vergnani, and Xander, Richard, Steven and Sacred Green, Terrence Monger, Braylen and Nevaeh Barnette, Lacion Bauer and Avie Brooks.  Also his special friend, Thelma Dexter. He is preceded in death by his wife, Roma; his son, Mark, his daughter in law, Barb and his brothers and parents. In lieu of flowers memorials may be made to benefit American Legion Post #42 or Folds of Honor. Memorials and condolences may be sent in care of Gillette Memorial Chapel 210 West 5th Street, Gillette, WY 82716. Condolences may also be expressed at www.gillettememorialchapel.com

To order memorial trees or send flowers to the family in memory of James Albert Reeves, please visit our flower store.