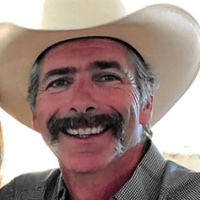 Memorial service for James Heald will be held at 11:00 a.m., Tuesday, August 13, 2019 at High Plains Community Church with Pastor Dan Morgan officiating. On May 20th, 1969, James Dewey Heald was born to Robert Heald and Jessie Nichols. James went on to grow up on his dad's ranch in Recluse, Wyoming and with his mother in Arizona. Later he would move to his Uncle's Ranch outside of Gate, Oklahoma, where he would attend Laverene Public High School and meet his first wife, Pamela Malone. James and Pamela, after reuniting in college, graduated from Northwestern Oklahoma State University, married, and he would go on to teach math at a local school. After changing into what would be his lifelong career, grain storage construction and retail, he and Pamela had a son, Marcus James. Another marriage and promotions would come next, but also the greatest coincidence of his life, through friends and a dance hall, meeting the love of his life, Patricia. Patricia, along with her son and James' adopted daughter, Trestin Swiggett and Brooklyn Heald, joined James in the greatest and ultimate chapter of his life, as he moved across the country, back to his home in Recluse, and started his own business, J & P Grain Solutions. James and Patricia would go on to raise cattle, grow stronger together as they put their mark on the family ranch and when they could find any free time from the business they also ran together, they'd dance to any tune they could find. In addition to learning how to fly, James was happy to fulfill his dream of waking up every day a little closer to his father and to his home. James was truly a servant of God, and through his Lords' grace, a servant to others. From school children to young adults, James devoted his life to giving people the tools they needed to better themselves. Friends will miss his laugh, if only because it made him easier to find, and the love that underpinned every piece of advice. Family will miss the comfort and God-given wisdom that he brought to solve every issue, always together.  James is preceded in death by his mother, Jessie (Nichols) Heald; his brother, Robert Heald Jr.; his paternal grandparents, George and Barbara Heald; maternal grandfather, Jimmie Nichols; his maternal grandmother and second mother, Deloris Nichols. He is survived by his wife Patricia Heald; his sons, Marcus Heald and Treston Swiggett; his daughter, Brooklyn Heald; his foster son, Quinn Horst; father, Robert Heald; step-mother, Marge (Brown) Heald; sister and brother-in-law, Tammy (Russell) Good; grandchildren, Lukas Heald, Taevan and Brhysan; as well as numerous friends and family. In lieu of flowers the family asks for memorials be made to benefit the Recluse Community Center. Memorials and condolences may be sent in care of Gillette Memorial Chapel 210 West 5th Street, Gillette, WY 82716. Condolences may also be expressed at www.gillettememorialchapel.com

To order memorial trees or send flowers to the family in memory of James Dewey Heald, please visit our flower store.