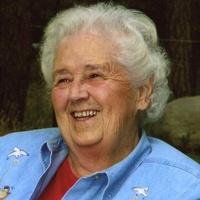 Irene L. (Harrod) Reed, April 17, 2019 passed away at The Legacy Living and Rehabilitation Center in Gillette, Wyoming. Born December 8, 1919 to Edwin and Pearl (Robb) Harrod.  Irene arrived in this world on one of the coldest days that had ever been experienced in the Gillette area...so cold that the family automobile would not start so she was delivered by the family at home.  The youngest of seven siblings, Irene and her brothers and sister were raised on a farm south of Gillette just off the Douglas Highway.  Irene married Albert R. (Hap) Reed on June 28, 1939 in Gillette.  In 1948 the family moved to Sheridan where she lived until age related issues dictated that she move to Gillette to be closer to the support of her daughters.  During her long and energetic life, Irene enjoyed bridge, bingo, bowling, golf, fishing, travel, and her winters in a Lake Havasu RV park and especially her family as it grew over the years.  For many years, she participated in the “Meals on Wheels” program delivering a warm meal and a friendly face to folks badly in need of both. Irene was preceded in death by her husband Hap; her parents; and her 5 brothers Kenneth, Clinton, Earl, Lawrence, and Lonnie; and sister, Vera (Harrod) Apple. She is survived by her three children, Ronald Reed, Virginia Reed and Mary Lynn Reed, grandchildren, Tyler Miller, Ross Reed, Leslie (Reed) Wyse, Susan (Reed) Rossi, and Nancy (Reed) McGee and ten great-grandchildren all of whom will greatly miss the presence of this great lady in their own lives.  No immediate services are planned in favor of a celebration of her life later in the summer. Memorials and condolences may be sent in care of Gillette Memorial Chapel 210 West 5th Street, Gillette, WY 82716. Condolences may also be expressed at www.gillettememorialchapel.com

To order memorial trees or send flowers to the family in memory of Irene L. Reed, please visit our flower store.