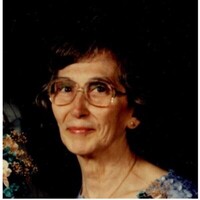 Inez Irene (Bellows) Griffin, 95 years old, passed away on May 23, 2021 in Gillette, Wyoming at The Legacy Living and Rehabilitation Center.  Inez was born on the family homestead on east shore of Indiana Lake in Porter Township, Michigan on August 17, 1925 to her parents Chester and Margaret (Wolgamood) Bellows. She was welcomed in the home by her brothers, Frank and John; sisters Jeanette and Grace along with her paternal grandmother, Mary (Pipher) Bellows.  Two years later the family was blessed with her youngest brother Burt.

Inez graduated from Bristol Indiana High School in 1943. After graduating high school, she entered into the Cadet Nurse Corp program created to address the forecasted nurse shortage during World War II.  She attended and received her Registered Nurse diploma from the Kalamazoo State Hospital in Kalamazoo, Michigan in 1947. She loved had a special gift for nursing and favored pediatric and elderly care during her career in Michigan, Indiana, Colorado and Nebraska.

On December 26, 1957 she married, Myron (Mike) Griffin in Augola, Indiana. She had known Myron from her childhood growing up on Indiana Lake where her husband’s family had stayed many times at her parent’s rental cottages on Indiana Lake. They later reconnected, married and started their lives together along with Myron’s sons Patrick and Christopher and daughter, Beth Jane in Colorado. Their family was later completed with the birth of their son, Brian and daughter Michele.  The family then moved to Nebraska for a short time before arriving in Gillette in 1974. Her plans of taking a break from nursing after the move faded shortly thereafter as she was quickly recruited by the Pioneer Manor nursing home which she retired from in 1997.

While living in Gillette, she and her husband started the Golden Eagle Coin shop, which Myron ran after his disability from WWII finally forced him into early retirement as a machinist. She and her husband had a passion for collecting old things.  Throughout her life she loved collecting dolls, postcards, stamps and Native American Indian crafts and was a bit of a rock hound.  Other hobbies included camping, gardening, reading, crocheting and sewing. Inez was always up for traveling adventures and loved capturing them in photographs. She enjoyed attending and watching hockey and baseball games. She made many friends with the players of the Detroit Tigers baseball team in the 1950’s while living in Detroit, Michigan. Inez loved her fur family members (cats, dogs and even a racoon) as well, and always had one or more in her family.

Inez treasured all her extended family members. She enjoyed receiving letters and photographs from them throughout the years allowing her to stay connected to them while living afar.  She was extremely excited to become a grandmother and later a great-grandmother and was truly one of the best!

Cremation has taken place and no services will be held per Inez’s request.  A memorial video tribute of Inez’s life will be available for those wishing to view at gillettememorialchapel.com   Those wishing to share their own memories or send condolences may also do so by visiting the website or sending them in care of Gillette Memorial Chapel, 210 W. Fifth St., Gillette, WY 82716. In lieu of flowers the family ask that donations be made in her memory to Gillette Animal Shelter PO Box 518, Gillette, WY 82717.

To order memorial trees or send flowers to the family in memory of Inez Irene Griffin, please visit our flower store.