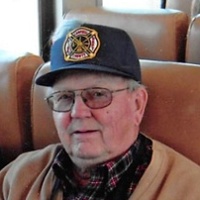 Ivan M. (“Toddy”) McCann died early Tuesday, May 28, 2019, at Close to Home Hospice, surrounded by his loving wife and partner of 53 years, Roberta McCann, and his three sons. Toddy was born on February 19, 1928, to Bede and Lela McCann, in Creston, Iowa. The McCanns were one of the pioneer families of Gillette, and his mother brought Toddy here by train when he was just 6 weeks old.

Toddy was known as a hard worker and great athlete even as a teenager.  He was offered an academic scholarship from the University of Rochester and a football scholarship from the University of Wyoming, but instead chose to stay in Gillette and married Donna Jean Cook.  They had three sons, Jody, Kent, and Tim.  Toddy and Roberta McCann were married February 12, 1966.

Toddy had the mind of an engineer and was always tinkering with some engine or another - from motorcycles to drag racing cars, campers, and boats.  He worked as a jug hustler and then became a mechanic.  From 1949 to 1954 he worked as a mechanic at Stockman’s Motor. In 1954 he began working at Record Motors and purchased it in 1958.  He operated the Dodge dealership there until 1964.  Wanting to build a new building on family land, he looked south and saw only farmland and a fence.  He took down the fence and he and Roberta built a building. This building was operated as a repair shop until 1975.  They built some other buildings on the property and after selling out the garage business they devoted full time to the rental buildings. In 1980 they built a two story brick building which tied all the buildings together to become the McCann Center at 1211 Douglas Highway. Toddy and Roberta ran that successfully for many years and sold it in 2003 to become snowbirds, enjoying the warm weather of Arizona.

Toddy was a true citizen leader in Gillette and Campbell County.  He served on the City Council and Planning Board. He served on the Campbell County Airport Board for 10 years and was the Chairman when the new facility was built.  He started his civic duties as volunteer fireman No. 24 in 1964 and served as Chief of the Gillette Fire Department from 1972 to 1976.  Toddy said, “I started as a grunt, held almost every position through chief and back to grunt.”  In 1996 he became the fourth Gillette firefighter to receive the Walk of Fame award.  Even in later age, he was considered the department’s Engineer Emeritus. Toddy monitored the department’s radio from home, and would go in to help with dispatch or to take food to the fire fighters in the field. In keeping with his dedication to the fire department, (and his love of vehicles!), Toddy and Roberta gave a 1949 Mack antique fire engine to the volunteer department.

Toddy was a 68 year member and Past Master of Gillette Blue Lodge # 28. He belonged to Knights Templar, York Rite Bodies, and Shriners. He was also one of the founders of the Wyoming Pilots Association and the Gillette Chapter of the Wyoming Civil Air Patrol and achieved the rank of Vice-Commander. He enjoyed flying his 172 Cessna until well into his later years, including flying many young people as part of the EAA Young Eagles program and taking visitors around the Devil’s Tower.

Toddy also liked to have fun!  He liked to camp, fish, and hunt. He enjoyed his garden, especially the fresh tomatoes and other vegetables which he shared with many people. He liked to play cribbage, bridge and Texas Hold-em Poker.  He had many adventures including flying on the Concorde, multiple transits of the Panama Canal and wall diving in the Caribbean. He and Roberta loved to travel, logging over 200,000 miles with Ports of Call. They also enjoyed the First National Bank Horizons Travel Club, and visiting many countries. For the last 19 years they have been snowbirds wintering in Arizona. Wherever, whenever, Toddy always had a joke for the occasion to make us all smile and laugh.

Toddy served his community and family in many quiet ways not well known to others.  He just went ahead and did the right thing, not caring for recognition. He and Roberta McCann are supporters of the Campbell County Senior Center.

Toddy is survived by his wife, Roberta McCann, sons Jody McCann (Peg Smelser), Kent McCann (Stephanie), and Tim McCann (Traci). He is also survived by nine grandsons and one granddaughter and five great-granddaughters.

The family wishes to thank the Close to Home Hospice staff who helped Toddy in his final hours.  In lieu of flowers, donations can be made to Close to Home Hospice, the Campbell County Senior Center, or a charity of your choice. Memorials and condolences may be sent in care of Gillette Memorial Chapel 210 West 5th Street, Gillette, WY 82716. Condolences may also be expressed at www.gillettememorialchapel.com . An informal open house celebration of Toddy’s life will be held on Saturday, June 8, from 2 to 4 PM at the Campbell County Senior Center.

Godspeed, Toddy, we will miss you.

“A man that never flies during his lifetime would be as a bird that is reared in captivity, to live, grow old, and die never to have known it had wings with which to soar the sky.”

To order memorial trees or send flowers to the family in memory of I.M. "Toddy" McCann, please visit our flower store.