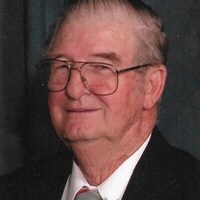 Graveside service for Henry Rigsby will be held at 10:00 a.m., Thursday, August 20, 2020 at Mt. Pisgah Cemetery. Henry (Hank) Carroll Rigsby of Gillette, Wyoming died August 15, 2020 in Gillette, Wyoming.  He was born April 21, 1929 in Van Alstyne, Texas to Henry S. Rigsby and Ruth Kenner Rigsby.  Henry was raised on a farm outside of Van Alstyne.  He joined the Navy on the same day of high school graduation in May of 1947.  He was stationed in San Diego, Pearl Harbor, and San Francisco.  While spending time in San Francisco he met his future bride Sara Helen Schei and they were married on September 2, 1951. Henry had the honor of serving on several ships while in the Navy. For his last assignment he was part of the crew on the USS Intrepid as it sailed from San Francisco through the Panama Canal to dry dock in Virginia in 1952. Hank and Sally lived in Van Alstyne, Texas, Denver, Colorado, Cheyenne, Torrington, Riverton, and Gillette, Wyoming   He worked for Wortham Machinery (later Wyoming Machinery).  He also worked for Gilpatrick Construction and Midvale Irrigation District while living in Riverton.  After retirement, he and Sally spent time traveling to Cody to help their daughter. When Hank was not working, he enjoyed fishing, hunting, and camping.  The family spent many hours at Boysen Reservoir, Bass Lake, and in the Wind River mountains.  At Christmas time, when the children were younger, the family took many long trips to either Texas or California to visit relatives. Hank was also a member of the Fraternal Order of Eagles in Riverton.  He held the position of Treasurer for many years. Surviving Henry are his sons, Christopher (Suzann), David (Nancy), Douglas (Cynthia), and Curtiss (Vivian).  Ten grandchildren, Christopher (Lynette), Paul (Lora), Matthew (Emily), Andrea (Jeremy) Groves, Tiffany (Cody) Jerry, Elizabeth (Dan) Nebelsick, Jessica (James) Fischer, Douglas (Kara), Henry, and Sarah also survive him along with 20 great-grandchildren. He is also survived by three brothers, Leon of Texas, Ralph (Eileen) of Montana, and Larry (Maureen) of Oklahoma. Preceding him in death are his parents, his life partner Sara (Sally), his daughter, Louise Bertsch and grandsons, Mark Rigsby, Timothy Rigsby, and Jeffrey Rigsby. The family request that memorials be made in Henry’s name  to benefit Meals on Wheels. Memorials and condolences may be sent in care of Walker Funeral Home 410 Medical Arts Court, Gillette, WY 82716. Condolences may also be expressed at www.walkerfuneralgillette.com

To order memorial trees or send flowers to the family in memory of Henry Carroll Rigsby, please visit our flower store.