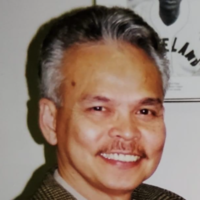 On Saturday, June 27, 2020, Henry Aranas Clarite, M.D., loving husband and devoted father of five children, grandfather of three, passed away at the age of 75. Henry was born on May 25, 1945, in Misamis Occidental of Northern Mindanao in the Philippines to Marcial D. and Andrea Aranas Vidalia Clarite.  He married Trinidad Pahilan on December 24, 1970, and they raised three sons- Mark, Henry, Jr., and Ronald and one daughter- Maria.  Henry received his medical degree from the Cebu Institute of Medicine in 1972; enlisted in the United States Air Force as Captain and Combat Rescue Officer where he continued to serve his medical internship in Chicago, IL, from 1974 to 1975.  In 1982, upon finishing his tour he became Chief Radiologist in Jasper, TX.  In 1984, he began his tenure with the Veterans Administration Medical Center as a Radiologist in Biloxi, MS. His successful career allowed him the opportunity to take on resident students from Tulane University.  In 1999, Dr. Clarite moved into Private Practice and worked in collaboration with Gulfport Memorial Hospital.  He retired in 2007 fulfilling his love for adventurous travels and visiting with his sister and lifelong classmates. Henry had a passion for medicine, but he had a greater passion for his family.  He had always perfectly balanced work life with vacation time spent with his family and friends- mostly at Disney World! Dr. Clarite loved woodworking as well. A carpenter at heart as he built a treehouse for his children while in Jasper, TX; he built his wife's greenhouse and the family gazebo in their backyard in Gulfport, MS; as well as, having built all his children's desks for their studies throughout their school years.  Dr. Clarite enjoyed listening not only to Sunday Sermons, but to music artists such as: the Beatles, Elvis Presley, Neil Diamond, Elton John, and Yanni just to name a few.  He loved to travel and loved even more to eat!  He cherished meals with family and friends, especially, after Church. Henry was known for his vast and incredible intelligence, his generosity and contributions to charity and his community, and mostly for his kind and compassionate SPIRIT to always better Mankind.  He spent quality time with his grandchildren and his sister and family.  He has been the foundation to his children's success; supporting them in their endeavors.  Henry spent the remainder of his last months in the beautiful state of Wyoming with his daughter and her better half James Wyatt in the city of Gillette. Henry was preceded in death by his father, Marcial, and his mother, Andrea.  He is survived by his wife Trinidad, his five children- Mark, Maria, Henry, Jr., Ronald and Cleophee and by his three grandchildren- River Aranas Clarite-Eastburn, Sophia Clarite and Ronan Clarite; his sister Carmelita and niece Carolyn along with great nephew Thomas, and great nieces Erin and Gracie. A funeral service will be held on Friday, July 10, 2020, at St. Joseph Church on Depew Road, Gulfport, MS at 2:00  p.m. Flowers or donations may be sent to 6212 Rebecca Cove, Ocean Springs, MS.

To order memorial trees or send flowers to the family in memory of Henry Clarite, please visit our flower store.