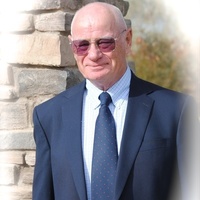 Mass of Christian Burial for Dr. Hein Kalke will be held at 10:00 a.m., Wednesday, October 30, 2019 at St. Matthew’s Catholic Church with Father Bryce Lungren officiating; interment to follow at Mt. Pisgah Cemetery. Rosary will be held at 6:00 p.m., Tuesday, October 29, 2019 at Walker Funeral Home. Surrounded by love from his wife of 55 years along with his children and grandchildren by his side, Hein H. Kalke, made his journey to heaven on October 18, 2019 from his home in Maricopa, Arizona.  Hein was preceded in death by his parents and is survived by his wife, Eva, children; Annemarie Kalke Delgado, Gabrielle (Christian) Kalke Hinterbuchner, Andrew (Deborah) Kalke, and Timothy (Ayla) Kalke, grandchildren; Dominik, Stephanie, and Victoria Kalke Hinterbuchner; Abby (Nick) Birkland, Riley Marsh, and Trevor Kalke; and Ilana and Orrick Kalke; and great-grandchildren: Eli and Theo Birkland. Born on July 24, 1939 in Breslau, Silesia, Germany, Hein spent his childhood during World War II in Berlin until the family emigrated to Australia in 1952 to start a new life. He completed his basic education and went on to graduate in 1965 with a Bachelor of Medicine and a Bachelor of Surgery from the University of Melbourne. He married Eva in January 1965 at All Hallows Catholic Church in Balwyn, Australia and over the years they were blessed with four wonderful children. Hein moved his young family to England to pursue post-graduate studies in Obstetrics and Gynecology where he was subsequently inducted into the Royal College of Obstetricians and Gynecologists (RCOG), later becoming a Fellow of the RCOG. Hein was further inducted into the Australasian College of Obstetricians and Gynecologists and was later board certified by the American College of Obstetrics and Gynecology. Hein’s career spanned several decades including 23 years practicing medicine in Gillette, Wyoming. He retired in April 2000, having compassionately cared for thousands of patients and skillfully delivered over 5,000 babies.  Hein was a forward-looking pioneer in Gillette when he established the first birthing center in the early 1980s. “Dr. K”, as he was known to many, was devoted to caring for his patients and committed to doing good wherever he could. He was known by those around him for his generous spirit and helping others learn and grow in their skills. Hein’s children all affirm a strong sense of family dedication, coming together as a team to care for each other when the occasion calls. Hein was athletic and at a young age practiced judo in which he attained black belt status.  He loved the outdoors and had a passion for alpine skiing, a passion which he passed along to his children.  Many fond memories of family skiing vacations will remain in our hearts.  He had a passion for flying and earned his private pilot’s license while working in Wyoming.  Hein had a strong technical aptitude and was constantly working on some mechanical project.  He characteristically demonstrated ethics, tenacity and perfectionism which he passed along to his children.  He was a wonderful Papa and husband.  He will be greatly missed by those who were fortunate enough to know him and his generous spirit. In lieu of flowers, donations to the American Cancer Society would be appreciated. Condolences may be sent in care of Walker Funeral Home, 410 Medical Arts Court, Gillette, WY 82716. Condolences may also be expressed at www.walkerfuneralgillette.com.

To order memorial trees or send flowers to the family in memory of Hein Hartmut Kalke, please visit our flower store.