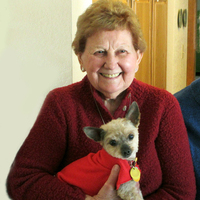 Mass of Christian Burial for Joan Davis will be held at 10:00 a.m., Saturday, May 15, 2021 at St. Matthew’s Catholic Church with Father Cliff Jacobson officiating; inurnment to follow at Mt. Pisgah Cemetery. Joan Brandner Davis passed away peacefully on April 29, 2021. She was born January 12, 1930 on the G-M Ranch near Gillette, WY to George and Adeline Brandner, the fourth of five sisters. She grew up branding cattle and loved helping her Dad on the ranch. After graduating Campbell County High School, she went on to the University of Colorado where she graduated with a Bachelor of Science, later finishing her Masters in Hospital Administration at the University of Minnesota. She served for twenty-two years as a Sister of St Francis. Over her life she is credited for bringing many hospitals out of the red into the black, while maintaining an encouraging kind demeanor that her coworkers admired. She was thoughtful and precise in everything she did from photography to woodwork to picking out and wrapping presents for all her family every birthday and Christmas. She always had a word of encouragement for everyone she met.  She married Robert E. Davis November 18, 1983 in Gillette where she remained, continuing to be active in the community, including serving on the Campbell County Hospital Board. She is survived by her husband Robert E. Davis, daughters Joy, Elise and Robin and son Jon; 11 grandchildren, six great grandchildren; sisters Pauline Wilson and Marge Davis, and many nephews and nieces. She was preceded in death by her parents, sisters Betty Roudebush and Helen Dunlap. Memorials and condolences may be sent in care of Gillette Memorial Chapel 210 West 5th Street, Gillette, WY 82716. Condolences may also be expressed at www.gillettememorialchapel.com

To order memorial trees or send flowers to the family in memory of Joan Davis, please visit our flower store.