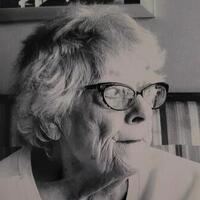 On January 29,2022, Gloria Morrison took her last breath on this earth at Primrose Retirement Community and went to a better place.  She was with her daughter, Rebecca.  Gloria was born on December 22, 1926 to parents Robert and Nell Rucker both of Saint Louis, Missouri.   She was the eldest of 5 children. Gloria excelled in school and was always the teacher’s pet.  She was an avid reader and could not get enough books.   After high school she attended college for a year at Washington University.  Finances did not allow her to continue but she was a self-taught expert at just about everything. She met the love of her life, Bruce Morrison, and they were married August 30, 1947 in Wuanita, Nebraska.   The couple lived in St Louis, Missouri, various cities in Wyoming, Billings, Montana, and finally settled in Gillette, WY in 1979.  They had one daughter, Rebecca Vance. Gloria had various careers but retired after working at Pioneer Manor as an aide.  She was a patron of the arts and loved opera.  She instilled that love in her daughter and the two of them enjoyed watching opera together. People who knew Gloria called her elegant.  With movie star good looks, she turned heads and remained beautiful up until the end of her life. She had an unwavering love for humanity and animals and gave extensively to those less fortunate.  She is preceded in death by her parents and her siblings Helen, Bobby, and Patsy.  She is survived by her sister, Roberta Philpot and daughter, Rebecca Vance. Celebration of Life will be at Holy Trinity Episcopal Church on Saturday, February 5th at 10 a.m. with luncheon to follow. Memorials are suggested to benefit Gillette Reproductive Health and Rest Easy My Friend. Memorials and condolences may be sent in care of Gillette Memorial Chapel 210 West 5th Street, Gillette, WY 82716. Condolences may also be expressed at www.gillettememorialchapel.com

To order memorial trees or send flowers to the family in memory of Gloria Maxine Morrison, please visit our flower store.