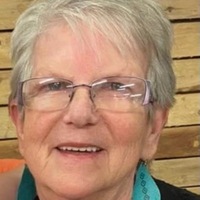 Mass of Christian Burial for Gloria Blohm will be at 10:00 a.m., Tuesday, April 6, 2021 at St. Matthew’s Catholic Church with Father Bryce Lungren officiating, interment at Mt. Pisgah Cemetery. Visitation to be held from 5:00 p.m. to 7:00 p.m., Monday, April 5, 2021 at St. Matthew’s Catholic Church; vigil to begin at 7:00 p.m..  Gloria Volk Blohm 72, met Jesus in heaven on her birthday, April 1, 2021 at home in Gillette, WY. She was born in Bismarck, ND to Gabriel and Natalia (Wingenbach) Volk on April 1, 1949.  She attended school in Bismarck, ND. She married the love of her life Ernest Blohm in 1967 and they eventually moved to Zap/ Beulah, ND in 1975. In 2013 they moved to Gillette, WY. Gloria was involved in numerous church and community organizations and held several offices in North Dakota and Wyoming.  Gloria was enthusiastic for life. She was the most caring, giving, and generous person. She was an example to everyone who encountered her. She always showed unconditional love to family, friends, and strangers, she made friends with everyone. Her faith was paramount. God was first and foremost in her life and she lived a strong Catholic faith.  Gloria was known for her crocheting, especially making prayer shawls. She was an avid crafter and enjoyed making angel gowns. She showed her love for others by cooking and did it well. Gloria is survived by her beloved husband Ernest of 54 years, her sons David (Kathy) of Beulah, ND, Darvin (Deanna) of Spring Valley, MN, Darren (Sherry) of Williamson, GA, one daughter Delora (Brian) Schmidt of Gillette, WY, one daughter-in-law Sandi of Gillette WY. Also, her grandchildren Casey (Stacy), Chauncey, Nicholas (Briana), Amity (Eric), Brianna, Arianna, Dustin, Dylan, Natalia, Jazlyn, Levi, Kendra (Mark), three Great-Grandchildren Savanah, Brinley, Braelynn and one on the way. one sister Alvina Roehrich of Bismarck, ND. She is preceded in death by her son Daniel, parents, and siblings. Memorials and condolences may be sent in care of Gillette Memorial Chapel 210 West 5th Street, Gillette, WY 82716. Condolences may also be expressed at www.gillettememorialchapel.com

To order memorial trees or send flowers to the family in memory of Gloria Marie Blohm, please visit our flower store.