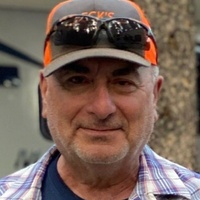 Memorial services will be held for Glenn Robert “Bob” Edwards Wednesday, January 6, 2021 at Cam-plex Energy Hall, 11:00 a.m. Glenn Robert “Bob” Edwards, 65, a lifetime Campbell County resident, passed away December 28, 2020 in Billings, MT due to COVID pneumonia complications.  Bob was born June 23, 1955 the third of nine children to Darrel and Arlene (Cosner) Edwards. He was raised on ranches south of Gillette before later moving northwest of Gillette to raise his family.  Bob attended schools in Campbell County graduating from CCHS in 1973. Bob worked at CO-OP through high school and later worked for Getter Trucking, PC Transport, Buckskin Mine and Northern Production. Bob and his family also ranched south of Gillette for many years. After retirement Bob enjoyed going to the Big Horns to camp and fish with friends and family. Bob looked forward to any hunting adventure whether it be his or others. What he loved best was helping his kids whether it was working cows, driving truck, or babysitting grandkids. Bob is survived by his wife of forty-three years, Jean, his children: Craig (Sarah), Cory (Terri), and Carey (Ryan), his four grandchildren: Taiten, Grady, Addison, and Keegan, and many more family members and friends. Bob was preceded in death by his parents, his in-laws Donald and Cecilia “Shorty” Ellsworth, his brother Roy Edwards and his sister-in-law Donna Nickel. Memorials and condolences may be sent in Bob’s name in care of Walker Funeral Home 410 Medical Arts Court, Gillette, WY 82716. Condolences may also be sent via the website: www.walkerfuneralgillette.com

To order memorial trees or send flowers to the family in memory of Glenn "Bob" Robert Edwards, please visit our flower store.