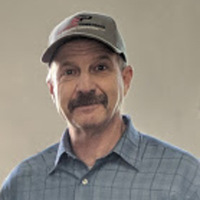 Gerry (*Gary*) E. Miller died on May 27, 2021 surrounded by loved ones after a long and courageous battle with Acute Myeloid Leukemia. He fought with everything he had, and we are so proud of him.  Gerry was born in Torrington, Wyoming in February 1964, to Dale and Eunice Miller. He was the third child of four boys. Gerry and his brothers were raised on a ranch in Van Tassell, Wyoming. The four boys created lots of memories and grew to be beloved pranksters for the local community. Gerry graduated from Niobrara County High School, in Lusk, in 1982. Gerry’s career began on harvest crew in Oklahoma the Monday after high school graduation. After a few years, Gerry was employed by J-Flag trucking and relocated to Casper, Wyoming. He then bought his own semi-truck at 21 years old and began a self-employed over the road trucking. Gerry later moved on and started a new job at the Dave Johnson Power Plant in Glenrock, Wyoming as a mechanic’s helper. While in Glenrock, Gerry met his wife, Kristy (Magee), and they were married August 1986. Gerry and Kristy eventually transferred to Gillette and he continued work as a mechanics helper at Wyodak Power Plant. In July, 1993, Gerry and Kristy had their son, Brandon, who was Gerry’s pride and joy. Throughout Brandon’s childhood, Gerry was a very loving and involved father attending all of his sons sporting events including hockey, baseball, and football. Gerry was always willing to help his son by coaching, attending practices, and countless other selfless acts. He never missed an event. To further his career dreams, Gerry studied his way up the ladder. He completed school at night to become a certified mechanic and welder. He eventually became a maintenance supervisor and established the maintenance program at Wyodak Power Plant. He left Wyodak Power plant and began working for Black Hills Energy as maintenance supervisor, and then later a planning supervisor. He left Black Hills, and was a project manager for an international company, Howden. Then Gerry decided to pursue a lifelong dream of starting his own company, Extreme Precision Industrial Contractors with his best friend and co-owner, Jeremy Carter. Gerry was a very well-respected boss and ethical businessman. He will be missed by countless employees, coworkers, and friends. Gerry also had a lifelong love for classic muscle cars. In his spare time he enjoyed building and restoring many different classic cars. He loved attending car shows and displaying his 1968 Chevy Camaro and his 1968 Plymouth Roadrunner, along with all the other mustangs and cars he restored over the years. Gerry is survived by his wife Kristy, his son Brandon (Alicia), his father Dale (Janice) Miller, brothers Dave, Phil, and Mark Miller, his seven nieces (Jami, Jodi, Jenifer, Janet, Mandy, Katelynn, and Kassidy), and his sister-in-law Kristol Miller. His father-in-law James Magee, Sister-in-law Heather (Marty) Hansen, Jim (Jen) Magee, Cathy (Dean) Emmert, and his nieces/nephews (Ashley, Adrian, Logan, Brock, Alexis, Ryker, Cameron, Brody, and Maddie) Gerry is preceded in death by his mother Eunice (Adams) Miller and mother-in-law Alison Magee. Gerry will be missed more than words can describe, and his family will honor his memory for the rest of their lives. There will be a service held for Gerry at the Cam-Plex Energy Hall, Thursday June 3, 2021 at 4:00 P.M. All are welcome to attend. Following the service, light refreshments will be provided.

To order memorial trees or send flowers to the family in memory of Gerry E. Miller, please visit our flower store.