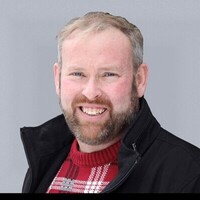 Funeral services for Gery Dillinger will be at 10:00 a.m. on Saturday, August 21st, 2021 at New Life Church, 1000 Comanche Ave, Gillette. On August 11th, 2021 Gerey caught a glimpse of heaven and decided to stay. Gerey Dean Dillinger was born on September 26, 1973 to Jerry and Kathie Dillinger in Gillette, Wyoming. The nurse at the hospital suggested that they name him Rufus Leroy, but as you can see they did not take her advice. He went by Gerey in school and in his professional life, but to his family he was known as Gerey Dean or Dean. His mom had a special nickname for him as well, Harvey Donut. Gerey was a wonderful man with the most positive attitude anyone has ever seen. No matter what he was going through or the situation at hand, he always found the positive side of everything, every single time. His love for his family, passion, determination, and work ethic was second to none. Gerey was born and raised in Gillette, Wyoming. He graduated from Campbell County High School in 1992. It was in high school where Gerey met his soulmate and best friend, Heather. They started dating in 1990 and were married on April 20, 1996. Gerey and Heather welcomed their sweet baby girl, Kylie, on April 5, 1993. On November 18, 1997 they welcomed their handsome boy, Kaelin. Gerey was all about his family and making memories with them. They went on many family “adventures.” There were quite a few National Lampoon’s Vacation moments for sure. A million memories were made, and they will forever be cherished. Gerey’s biggest goal in life was to make sure his family was taken care of. His family always came first. He was a hard worker and provided a wonderful life for his family. In July of 2012, Gerey became a grandpa when Karter Reid was born. He always said that Karter taught him patience and how to be a better person. Karter was the one to give Gerey the name “Opa'' and that is a name that he wore with pride. In April of 2016, he became an Opa for a second time when Landri Quinn was born. Landri was Opa’s garage buddy, little princess, and she loved to “help” Opa with any project he was doing. Gerey gained a “bonus” grandson, Kamden Wayne, when Kylie started dating Kenyan. Gerey loved being an Opa and would always light up whenever he would see them. He was the most helpful, handy, determined, quick witted, and loving person. He meant the world to his loving wife, kids, and grandkids. He loved traveling with his family, Jeeping, dirtbikes, a good cigar, and bourbon. He loved life and lived it to the fullest. In high school he started working at Star Video Audio where he developed a love, borderline obsession, with home/car audio. He loved building speaker boxes, installing stereo systems, and installing home stereo systems. He also worked for TCI and then Schwans, where his fun and personable personality came in handy. He made a lot of lifelong friends during his time at Schwans. In 2002, Gerey was hired at Bucyrus International and by 2011 he was the Director of Sales-HEX, EMS, Drills, and Dragline-U.S. and Mexico. His time at Bucyrus changed his life and it is where he developed a love, passion, and appreciation for the mining industry. He excelled at selling mining equipment and he was proud of every piece of equipment he sold. Bucyrus was bought out by Caterpillar in 2011 and he worked at CAT as a Manager of Product Solution-Surface Extraction until 2013. In 2013 he worked at Phoenix Products as a Manager for North American Mining and Mineral Markets. In 2016 he was hired by Liebherr as a Regional Sales Manager-Mining, where he worked until the time of his death. Gerey had an amazing work ethic. Even on the days he was having chemo, he would sit in the chair and work. Everyone that knew him was amazed by him. Gerey was a current member of the Colorado Mining Association and Energy Sector Committee-NWCCD. Over the years he was also a member of the Oil and Gas Committee, Board of Director for the Kilgore, TX Chamber of Commerce, Rocky Mountain Coal Mining Institute-Membership Committee, Gillette Rotary, and Wyoming Mining Associates-President. Gerey is survived by the love of his life, soulmate and best friend, Heather; his loving daughter Kylie (Kenyan) Martin; his beloved son Kaelin Dillinger; three amazing grandkids Karter Reid, Landri Quinn, and Kamden Wayne. His faithful companions and “Let’s go do guy stuff” buddies, Dash and Hudson; His father, Jerry Dillinger; in-laws; Deby Lynch, Danny (Mary)James, Bob (Robin)Schweitzer, Cindy Porter. Siblings; Charlene Bernard, Mike (Shelli) James, Christy (John Schlautmann) Porter, Dusty (Barbara) James, Dennis (Teresa) Schweitzer, Sarah (Travis) Bruns, Jerri (Rich) Brinkerhoff. Nephews; Tyler (Libby), Lucas, Marcus, Cody, Ty, Dominick, Gavin, Ezra, Matthew (Brandi), and Ryan. Nieces; Shelby, Sophie, Lilla, Bella, Charlie, Josephine, Annalise and Devyn (Caleb). Numerous aunts, uncles, cousins, and two grandparents (in-law). Preceded in death by his beautiful mother, Kathie; father-in-law, Ed Porter; paternal grandparents, maternal grandparents, aunt, uncle, and his other faithful companions; Odie, Izzy and Parker. Memorials and condolences may be sent in care of Gillette Memorial Chapel 210 West 5th Street, Gillette, WY 82716. Condolences may also be expressed at www.gillettememorialchapel.com

To order memorial trees or send flowers to the family in memory of Gerey Dean Dillinger, please visit our flower store.