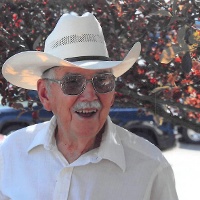 Funeral service for Gerald “Bud” Clements will be on Wednesday, August 7, 2019 at 10:30 am at Family Life Church with Pastor Martin Crump officiating. Burial will be at 1;30 pm at Mt. Pisgah Cemetery with Masonic rites and also military honors provided by the American Legion Post #42.

Visitation will be on Tuesday, August 6, 2019 from 4-7 pm at Gillette Memorial Chapel.

Gerald O. “Bud” Clements, 89, passed away August 2, 2019 at home in Gillette, WY surrounded by family. He was born in Maysdorf, Wyoming on March 11, 1930 to Otice R. and Marie F. (Hackett) Clements.  Bud attended Hendricks School until the 3rd grade.  On his 9th birthday the family moved to a ranch they purchased near Biddle, Montana on Ranch Creek.  He attended Ranch Creek School and later graduated from Campbell County High School in 1948.  Bud was active in FFA and played football.  In 1952 he met the love of his life, Janet M. Holdeman at a dance in Biddle, Montana.  They were married September 2, 1953 in Sheridan, Wyoming.  They had 3 children, Darel, Dalene and Mike.  Their first home was on the Dick Moore Ranch.  Bud worked for Dick Moore till 1954 when he was inducted into the U.S. Army.  He was stationed in Panama and served as a cook.  After his honorable discharge Bud and Janet moved to the Family Ranch on Ranch Creek for 5 years.  They then moved to Gillette, WY and Bud worked for the Farmer’s Coop.  Later the family moved to Broadus, Montana where Bud managed the Farmer’s Union Coop.  Three years later they moved back to Gillette, where Bud became the Assistant Manager of the Farmer’s Coop until his retirement in 1993.  Bud and Janet became “Snow Birds” settling in a park in Coolidge, Arizona.  Bud golfed, played pool and was a member of the Park Band.  He always had a love for music and played guitar and mandolin.  He learned woodcarving while in Arizona and made beautiful carvings, and even tried his hand at sculpting. Bud also loved fishing, playing baseball, hunting, camping and spending time with his family.  He was a member of the Lion’s Club, Masonic Lodge, The York Right and Commandry, Shriner’s Club and the American Legion.  He also served as a Gillette City Councilman from 1973 to 1976 and is a member of the Family Life Church.

Memorials have been established in Bud’s name to benefit St. Jude’s Children’s Hospital, Shriners Hospital or a charity of one’s choice.  Condolences may also be mailed in Bud’s name to Gillette Memorial Chapel, 210 W. 5th St, Gillette, WY 82716 or via the website, www.gillettememorialchapel.com

To order memorial trees or send flowers to the family in memory of Gerald Otice Clements, please visit our flower store.