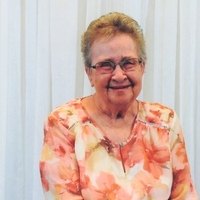 Funeral service for Georgia Schmidt will be held at 2:00 p.m., Friday, April 23, 2021 at Gillette Memorial Chapel with Pastor Lester Bentley officiating; interment to follow at Mt. Pisgah Cemetery. Visitation will take place from 4:00 p.m. to 7:00 p.m., Thursday, April 22, 2021 at Gillette Memorial Chapel. Georgia Lee (South) Schmidt age 83, of Gillette, WY passed away Sunday, April 18, 2021 surrounded by her family. Georgia was born to Joe and Margaret South in Sandpoint, Idaho on March 9, 1938. She joined her sister, Shirley White of Boise, Idaho and was blessed with an additional four siblings Jim South of Bridger, MT; Ginger Weber of Boise, ID; Kenny South of Jordan, MT and Dan South of Jordan, MT; whom she had a very close relationship with. At an early age Georgia moved with her family to the Miles City area where she met her first husband. From this union Georgia had six beautiful children, Ronda (Pat) Gaffield of Gillette, WY; Deb Ledbetter of Gillette, WY; Carla (Monte) Fitch of Jordan, MT; Jim Carter of Gillette, WY; Sherry Beasley (John Heimann) of Wright, WY and Joe (Chris) Schmidt of Coon Rapids, MN. Georgia met the love of her life in Jordan, MT and wed Fred Schmidt on August 23, 1968 from this marriage they had Shelly (Leonard) Besel of Gillette, WY. Fred and Georgia moved to Gillette in 1982 where Georgia worked as a daycare provider and at the Countryside Café until her retirement. After her husband’s passing Georgia moved to Jordan for a short time to take care of her ailing parents and moved back to Gillette in 2012 where she resided until the time of her passing. Georgia is survived by her six children, five siblings and their spouses, 26 grandchildren, 54 great-grandchildren and three great-great-grandchildren. She is preceded in death by her parents, her husband, daughter, Carla; son, Billy; son-in-law, Kyle and four grandchildren. In lieu of flowers the family request that memorials be made in Georgia’s name to the Seventh Day Adventest Church 901 Apricot St., Gillette, WY 82716. Condolences may also be expressed at www.gillettememorialchapel.com

To order memorial trees or send flowers to the family in memory of Georgia Lee Schmidt, please visit our flower store.