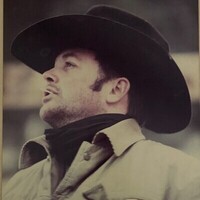 Graveside services for George Zimmerschied will be held at 3:00 p.m., Friday, June 25, 2021 at Pine Grove Cemetery, Oshoto, WY. George Lee Zimmerschied 75, lifetime Crook County Pioneer passed away peacefully in his sleep at home on June 21, 2021. George was born on April 5, 1946 to Howard and Grace Zimmerschied of Carlile, WY. He grew up on the family ranch and attended school at Cabin Creek and Moorcroft. He graduated Moorcroft High School in 1964. George was active in the F.F.A. and raised Suffolk sheep; he worked and helped his dad on the ranch and eventually had cattle and sheep of his own. He married Adeline Winingar of Kaycee on July 3, 1981 and to this union they had four children. Everett, Kari, Eric and Shelby. George loved his horses and you could almost always find him horseback. He liked hunting and enjoyed the hunters that came out every fall. He was always willing to help out neighbors and friends when needed. George is survived by Adeline; sons, Everett (Whitt) of Carlile; Eric (McKayla) of Carlile; daughters, Kari of Gillette; Shelby (Tim) of Gillette; six grandchildren, Skyler of TN; Paisley and Colt of Carlile; Harper, Cambree and Ronin of Gillette; brothers, Dan (DeDe) of Carlile; and Dee (Lori) of Carlile. He is preceded in death by his parents, Howard and Grace; paternal grandparents, Fred and Leona; maternal grandparents, Everett and Sophie Woods. Memorials and condolences may be sent in care of Gillette Memorial Chapel 210 West 5th Street, Gillette, WY 82716. Condolences may also be expressed at www.gillettememorialchapel.com

To order memorial trees or send flowers to the family in memory of George Lee Zimmerschied, please visit our flower store.