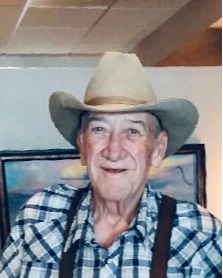 George Champ Steele, age 70, died in the arms of his wife on November 12, 2022 in Gillette, WY after a courageous battle with cancer. George was born December 16, 1951 to Edwin and Edna Steele in Sundance, Wyoming. He graduated from Sundance High School in 1971. He is affectionately known as Champ to many friends across the state. He loved to break and train horses, hunt, fish, go to auctions, and camp in the Big Horn mountains. Champ retired after many years working for Powder River Energy Company. He was married to his wife Wanda K Steele for almost 39 years. Champ had three children, Josh Steele of Wright, WY, Corey Steele (Renae) of Wright, WY and Brandi Jackson (Corey) of Copperas Cove, TX. He also had four stepchildren, Tammy Thompson of Gillette, WY, Terry Thompson of Moorcroft, WY, Gene Thompson of Gillette, WY. He is survived by his sister, Carol Dennis of Sundance, WY, brother, Edward Schleichardt (Carol) of Sheridan, WY. Champ had 12 grandchildren, 6 great-grandchildren and many nieces and nephews. Champ was preceded in death by his parents Edwin and Edna Steele, stepson Floyd Thompson of Las Vegas, NV, brother, Bill Steele of Boston, MA, brother, David Steele of Dayton, WY. Champ was a good man and will forever be remembered as one tough cowboy! The family will have a celebration of Life gathering on June 17, 2023 in Gillette, WY. More details will be publicized later. Memorials and condolences may be sent in care of Gillette Memorial Chapel 210 West 5th Street, Gillette, WY 82716. Condolences may also be expressed at www.gillettememorialchapel.com

To order memorial trees or send flowers to the family in memory of George Champ Steele, please visit our flower store.