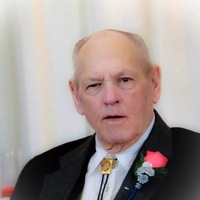 Funeral service for George Otten will be at 11:00 a.m. on Monday, August 17, 2020 at Walker Funeral Home with Pastor Jared Tucher of Trinity Lutheran Church officiating. A visitation will be one hour prior to service. Burial will follow service at Mt. Pisgah Cemetery.

George was born in Sioux Falls, SD on March 22, 1934, a son of the late George and Mary  Otten and the Husband of the late Mary Louise (Amberg) Otten.

George was retired truck driver and heavy equipment operator. In his retirement he raised and rode horses. He was a beloved member of Faith Lutheran Chapel of Pickens, SC.

The family would like to thank Cannon Memorial Hospital, Pickens, SC, Hospice of South Carolina, Walker Funeral home, of Gillette, WY and the members of Faith Lutheran Chapel, of Pickens, SC. Memorials and condolences may be sent in care of Walker Funeral Home 410 Medical Arts Court, Gillette, WY 82716. Condolences may also be expressed at www.walkerfuneralgillette.com

To order memorial trees or send flowers to the family in memory of George Frank Otten, please visit our flower store.