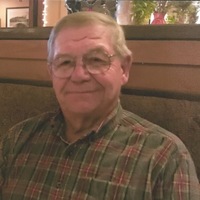 Memorial services for George Mandeville will be held at 11:00 a.m., Friday, March 6, 2020 at Gillette Memorial Chapel, inurnment to follow at Mt. Pisgah Cemetery. George (Bud) Mandeville 69 of Gillette, WY passed away in Close to Home Hospice House on February 27, 2020 from complications of cancer, surrounded by loved ones. George was born in Dunning, Nebraska on August 25, 1950, in his grandmother’s house by the river to Zelda and George Mandeville. He attended Halsey/Dunning High School and graduated in 1968, he then attended Chadron State College.  George married Billie Lynch on December 7, 1969 and together they had 3 children, Dani, Brad and BJ. He started working in the oil field in the summer of ‘69, moved on to assistant manager at Decker’s Grocery, then built bridges for Neosho Construction. He returned to the oil field in the late 70’s where he spent the rest of his career, ending with Merit Energy as a lease operator. He enjoyed spending time with his dad in Arizona, he loved the outdoors, and was particularly fond of baseball and the Colorado Rockies. He also loved watching Wyoming Cowboys football games with Mel and Rachael Lynch. He loved fishing with Carl Lynch, and elk hunting with Ralph Barbour and Carl Puls. George also loved all of his pets, Moose, Fubie, and the newest addition, Elmo. He was a loving and devoted father and husband; and worked his entire life for his family. George was also a proud member of Oddfellows and the Elks. George is survived by his wife of 50 years, Billie; his children, Dani, Brad and BJ; sisters, Linda Cowdin, and Sheri and Wayne Rodocker;  mother-in-law, Georgia Barbour; sisters-in-law, Linda Lynch and Margie and Michael Vonflatern and brother-in-law, Carl Lynch; nieces and nephews, Eric and Adriana Cowdin; Thayne and Trish Rodocker; Sally and PJ Hoos; Michael Dorr; Travis and Sarah Dorr; and several grand-nieces and nephews.  He was preceded in death by his parents, Zelda and George Mandeville; father in-law, Mel Lynch; and brother-in-law, Leonard Cowdin.  In lieu of flowers memorial donations may be made in George’s name to the Wyoming Foundation for Cancer Care.  Memorials and condolences may be sent in care of Gillette Memorial Chapel 210 West 5th Street, Gillette, WY 82716. Condolences may also be expressed at www.gillettememorialchapel.com

To order memorial trees or send flowers to the family in memory of George Norman Mandeville, please visit our flower store.