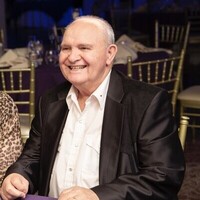 Memorial service for George Benton will be held at 4:00 p.m., Wednesday, January 19, 2022 at Gillette Memorial Chapel with Pastor Ernie Bishop officiating. George LeRoy Benton, age 79 of Gillette, Wyoming passed away Wednesday, January 12, 2022 at Campbell County Memorial Hospital.  George was born on November 23, 1942 to Thad and Alberta Benton in Hot Springs, South Dakota.  George met Margaret Davidson in Moorcroft, Wyoming in the summer of 1963 and were later married on November 16, 1963 at the Presbyterian Church in Gillette, Wyoming.  They were married for 58 years at his passing and had three children, Jodi LaRae, Robert Earl, and George Anthony.  George worked as a mechanic in various places such as Edgemont, SD, Moorcroft, WY, Kaycee, WY, Worland, WY, Riverton, WY, and finally settled in Gillette.  He worked for Wyoming Machinery Company from 1985 until his retirement in 2010. He is preceded in death by his parents Thad and Alberta and by his younger brother Tony.  He is survived by four younger brothers, John, Mack, Roger, Donald, by his younger sister Tina, by his three children, by four grandchildren, and nine great-grandchildren. Memorials and condolences may be sent in care of Gillette Memorial Chapel 210 West 5th Street, Gillette, WY 82716.  Condolences may also be expressed at www.gillettememorialchapel.com.

To order memorial trees or send flowers to the family in memory of George Leroy Benton, please visit our flower store.