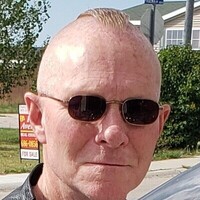 Gene Merlin Whitted began his last long motorcycle ride on November 11, 2021. He was born December 6, 1955 in Huron, SD to Merlin and Berniece Whitted.  He was soon joined by his sister Lucinda. Early years were spent in Eastern South Dakota.  After moving to western SD, his parents divorced and he later gained a stepmother, Carol and 2 stepsisters, Sheri and Shelda. The family grew with the birth of half-sister Rene. The family moved to Gillette in his early high school years for a short time, then back to SD and they landed in Broadus, MT where he graduated in 1974. Here he met and later married the love of his life, Donna Denson. Gene enlisted in the US Army and spent 3 1/2 years in Germany. Gene and Donna were blessed with the birth of son Jamie and daughter Dina before returning to civilian life, settling in Gillette.  When son Jamie enlisted in the Army, Gene joined the National guard.  Gene enjoyed military life and proudly served including deployment to Iraq in 2004 after which he decided to leave the military behind. Gene worked at Caballo mine for over 40 years and retired in August of 2021. Gene's greatest joy in life was his children, grandchildren and great-grandchildren. He enjoyed camping.  Another of his favorite things was spending time in Cancun. He was a member of the American Legion and the Legion Windriders. He was very honored this past year to help escort the traveling wall to Gillette. He could claim to have ridden his motorcycle at least one day each month of the year. He was a common sight around town on either his motorcycle or his big green truck which always flew the American flags. He loved to talk to people and they didn't stay strangers for long.  He will be missed by not just his family, but everyone who knew him. He was preceded in death by his father Merlin, mother Berniece, stepmother Carol and sister Sheri. He is survived by his wife Donna, son Jamie (Michelle) and their daughters Aubrie and Madison, daughter Dina and her children Ronald Lazarus, Destiny Mills, and Jaden Ford and great-grandchildren Cassandra and Nevaeh Whitted, Xaidyn Uechre and Mazakeen Ford. Also surviving are his sisters Lucinda (Marvin) Shelda (Doc) Rene (Derrick) and numerous aunts, uncle, cousins, nieces and nephews. A celebration of life will be held at a later date. Memorials and condolences may be sent in care of Gillette Memorial Chapel 210 West 5th Street, Gillette, WY 82716. Condolences may also be expressed at www.gillettememorialchapel.com

To order memorial trees or send flowers to the family in memory of Gene Merlin Whitted, please visit our flower store.