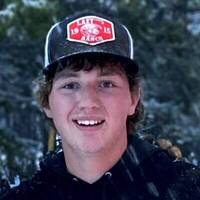 Memorial service for Gavin Reynolds will be held at 1:00 p.m., Friday, July 29, 2022 at High Plains Community Church with Pastor Dan Knust officiating. Gavin Chase Reynolds, age 17 was called home July 21, 2022 to spend eternity with his Lord and Savior Jesus Christ. Gavin Reynolds was the youngest child born to Dusty and Heather Reynolds on January 19, 2005 in Gillette, WY. He joined his two older sisters Maddison and Taylor to complete Dusty and Heather’s family.  From a young age, Gavin was a cowboy at heart, he loved anything to do with the outdoors and animals. Gavin attended both elementary and high school in his hometown of Moorcroft, WY where he was going into his senior year. He participated in football and wrestling during the school year but could always be found either horseback, haying, or his all-time favorite “mending fence” during the summer months. (If you knew Gavin very well, you’ll understand the sarcasm here). Anyone that was blessed enough to spend any amount of time around this young man soon found his humor and kindness in everything he did or said. He was always willing to give a helping hand and never knew a stranger. Gavin was most definitely the humor of his family and will be greatly missed. Gavin was never much for wanting to go to college, instead he found himself happiest ranching. He planned to make a future and career around this. He was employed by Crump Land and Livestock. Gavin saw the beauty in the land that God created, he never took for granted being able to work outdoors with equipment or animals. Gavin wanted to be just like his father, he appreciated his father’s humbleness and smarts. He wanted to know a little bit about everything just like his dad. Although he wanted to be just like Dusty, he was a mama’s boy through and through. He cared for his mom deeply and made sure she was always taken care of and treated well. His mom and sisters would frequently get pictures of Gavin stopped on the side of the road picking them flowers. His favorite to pick were wild sunflowers, which just so happen to be his mom’s favorite. Although Gavin was the youngest, he stepped up and acted like a big brother to his sisters. Gavin and his oldest sister Maddison had a strong and unique bond that could never be broken. The two could sit in a room of total silence and knew exactly how one another felt mentally and spiritually. They often were found cracking jokes and always making a chuckle out of any situation. Gavin had an inseparable relationship with his sister Taylor, they were always mistaken as twins. You hardly saw these two without each other. Gavin had a great love for the Lord and was baptized on July 17th, 2016. His favorite and first memorized bible verse was Deuteronomy 6:5 “Love the Lord your God with all your heart, with all your soul, and with all your strength.” Although Gavin’s time on Earth has been cut short, he made a long-lasting impression on every person around him. Gavin now joins our Father in heaven and will be greeting us at the gate. Memorials and condolences may be sent in care of Gillette Memorial Chapel 210 West 5th Street, Gillette, WY 82716. Condolences may also be expressed at www.gillettememorialchapel.com

To order memorial trees or send flowers to the family in memory of Gavin Chase Reynolds, please visit our flower store.