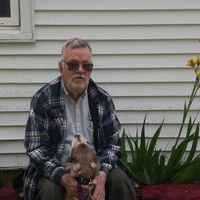 Funeral service for Freeman “Dean” Turley will be held at 10:00 a.m., Saturday, January 25, 2020 at Walker Funeral Home. Freeman “Dean” Turley was born on February 11, 1940 in Cody, WY to Freeman and Alice (Riesland) Turley. He grew up in Cody. The family moved several times. At 17, he joined the US Airforce where he travelled to many countries and became a Staff Sargent, he was honorably discharged after 20 years of service.  After retirement he lived and worked in Gillette, WY; spending winters in Oklahoma. He worked at Wyoming Work Warehouse. He was also a volunteer for many years at the Rockpile Museum in Gillette. He spent a lot of time at the Campbell County Senior Center and at one time was on the board. Dean loved to travel, read books, and most of all spending time with his dog, Crystal. He was a member of The Church of Jesus Christ of Latter-day Saints. He is survived by his brother, Buddy (Jean) Turley of Mesa, AZ; sister, Sharon (Bob) Copp of Buffalo, WY; many nieces, nephews, and cousins. He is preceded in death by his father, mother, three brothers, three sisters, two nephews and one niece. The family request that memorials be made in Dean’s memory to benefit the Rockpile Museum in Gillette. Memorials and condolences may also be sent in care of Walker Funeral Home 410 Medical Arts Court, Gillette, WY 82716. Condolences may also be expressed at www.walkerfuneralgillette.com

To order memorial trees or send flowers to the family in memory of Freeman "Dean" Eugene Turley, please visit our flower store.