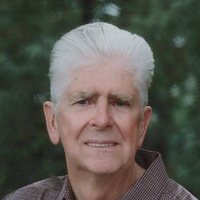 Memorial Service for Fredrick Jessie “Fred” Layman will be at 2:00 p.m., Friday, January 3, 2020 at Walker Funeral Home, Gillette, WY, with Pastor Dan Morgan of High Plains Community Church officiating. Fred “Freddie” Jessie Layman, 76, of Fishers, Indiana, went to be with the Lord on December 30, 2019 in Gillette, Wyoming at the Close to Home Hospice, surrounded by his loved ones. Fred was born on January 24, 1943 in Manistee, Michigan to Dorothy and Lewis Layman.  He was raised on the family farm in Irons, MI where he helped work the farm and enjoyed riding horses. He attended high school in Utica, MI, where he was a member of the swim team, graduating in 1961. He married Gretchen Olivia Rye on June 15th, 1963.  After high school, one of Fred’s first jobs was working for Ford Motor Company. He and Gretchen eventually made their way to Gillette in 1967 where he co-established R&L Water Service with his father-in-law, Charles Rye. In 1980, Fred began his career at Cordero Mine, where he was a dedicated and skilled equipment operator with a strong work ethic, who always looked out for his fellow co-worker.  He retired from the mine in 2007.  Fred enjoyed fishing in the Big Horn Mountains, Sunday drives, and, most of all, spending time with his family. He will be remembered for his keen sense of humor, knack for storytelling, and a determination to do his best at any job he was given.  Fred is survived by his wife of 56 years, Gretchen; daughter Tania (Bob) Young of Gillette, WY; son Chuck (Marcella) Layman of Indianapolis, IN; grandchildren Taylor (Eric) Shultz, Kate Young, Alyssa Layman and Jackson Layman; sister Margaret; brother Michael; brother Richard; brother Steve (Mary) Layman of Gillette, WY; and many other family members.  He was preceded in death by his mother and father; his sister, Barbara; and his brother, George.  Memorials and condolences may be sent in care of Walker Funeral Home 410 Medical Arts Court, Gillette, WY  82716.  Condolences may also be expressed at www.walkerfuneralgillette.com

To order memorial trees or send flowers to the family in memory of Fredrick Jessie Layman, please visit our flower store.